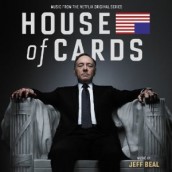 Jeff Beal hears the hypnotic corruption in the halls of power

Though he’s relatively young, it seems that composer Jeff Beal has been at TV series like FAMILY LAW, ROME, UGLY BETTY and MONK with the entrenched dependability of a continuously elected senator. If that’s an apt metaphor, then it’s no wonder that HOUSE OF CARDS just might end up being Beal’s biggest hit in the medium- even if the “network” it’s on happens to be Netflix. You might also find it hard to believe that the English came up with the idea first for such a distinctly American show about a devious politician out to step up the broken ladder to presidential power by hook and crook. Just like a bribe or favor one can’t refuse, Beal’s thoroughly entrancing scoring is about smooth, slick backroom manipulation.

Far more a devilish TV noir whisper than in-your-face than musical strong-arming, Beal uses beautifully melodic, yet subtle string movements, piano, dulcimer and jazz beats in his smartly chosen ensemble, along with more hallucinatory and propulsive samples to capture its antihero’s seductive, snake-like charms on his rise to the top. But in the end, the emotions to be gleaned are the sadness of how screwed our system is. Most people have watched HOUSE OF CARDS in filibuster marathons, so listening to Varese Sarabande’s two-CD collection will prove to be a positive breeze as it shows just how thematically integral each cue is to Beal’s haunting trip through the corrupt corridors of power.

Clink on the link to buy the HOUSE OF CARDS soundtrack