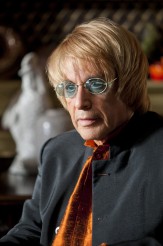 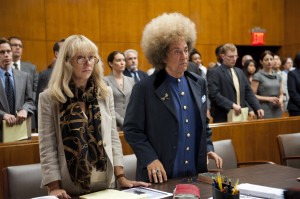 Even by the extreme standards of outrageousness in rock ‘n’ roll history, Phil Spector’s story stands out – the man went from visionary record producer to murder suspect accused of killing his girlfriend, Lana Clarkson.

David Mamet has written, produced and directed the HBO drama PHIL SPECTOR, which premieres Sunday at 9 PM. Starring Al Pacino as Spector and Helen Mirren (who took over the role when Bette Midler had to stop one week into filming due to health problems) as his attorney Linda Kenney Baden, the film deals with Spector’s first murder trial.

Speaking to the press at the Television Critics Assocation press tour, Mamet is asked what he thought about the case during the actual trial. His answer is that he didn’t have an opinion until he saw a documentary about it. “I didn’t know anything at all about the case. I knew the music, of course. I’m much older than Linda, and I did grow up with the music. And my agent, John Burnham, said, ‘You’ve got to see this documentary. It’s by this guy called Vikram Jayanti, and it’s called THE AGONY AND THE ECSTASY OF PHIL SPECTOR.’ I said, ‘I don’t want to know anything about Phil Spector. I know all I need to know, which is that he was a freak, he killed some girl, he went away. Good. Good riddance.’ So he said, ‘See the documentary.’ So I see the documentary, and it’s a brilliant documentary. And you start out; in the first ten seconds you’re saying, ‘Oh, this guy’s a freak. He’s small. He’s wizened. He talks funny. His arms are shaky. He’s obviously a freak.’ Three minutes later, you say, ‘Well, but he says some interesting things.’ A half an hour, you’re saying, ‘How could I be so prejudiced? The guy’s kind of brilliant.’ And at the end of the documentary, you’re saying, ‘Wait a second. I came to this with such prejudice. Maybe the guy’s not guilty.’ And so I called up Len [Amato, president of HBO Films]. I said, ‘There’s something here. I don’t know what it is.’ And he says, ‘Go ahead and write the movie. There’s just one thing. You can’t indict the victim.’ I say, ‘Oh, I get it. I can’t indict the victim. Of course, I can’t indict the victim.’

“So then I realize that’s not only a proviso, that’s the essence of the story, which you’ll see. Al, when he read the script, he said, ‘You know, David, the funny thing, it’s not my movie. It’s Helen’s movie. It’s Linda Kenney Baden’s movie.’ In a sense it is. It’s her journey. And so that became the motivating force of the movie, is she inherits this case that she was Linda inherits this case that she wasn’t on. Curiously, Helen also inherited this movie that she wasn’t on. All that she says throughout the movie is, ‘I won’t indict the victim. I won’t indict the victim.’ And Jeffrey Tambor, playing [Bruce Cutler], says, ‘We’ve got to get him off. He’s entitled to a defense.’ And Helen, because she says, ‘Under no circumstances will I indict the victim,’ she comes up with an alternative defense that no one could ever have expected, that was just not on the table. So that’s what the movie is about. It was prompted by Len, although he is a producer and an executive.”

Following the panel, Mamet makes himself available for a few more questions. 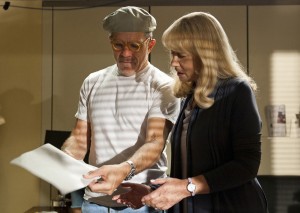 AX: When you’re writing a project that has factual elements that can be researched, is that a hindrance or a help?

AX: Can you elaborate?

MAMET: Sure. It’s like the difference, if you’re a really good architect, [between] building a building, and taking apart a building and renovating it, but you don’t know what’s inside of it. So it’s always easier to build the building from scratch.

AX: So what made you decide to do the allegorical renovation?

MAMET: Well, I mentioned, I saw the documentary and I found myself a victim of prejudice. I said, “Oh, my gosh, you’re a prejudiced guy. You thought the guy’s a monster because someone told you he’s a monster, but if you listen for half an hour, you realize perhaps he’s not a monster.’”