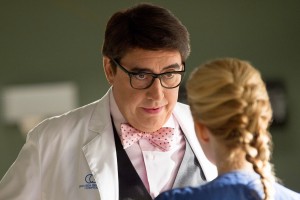 David E. Kelley (creator of DOOGIE HOWSER, M.D. and CHICAGO HOPE, along with PICKET FENCES, ALLY McBEAL, THE PRACTICE and BOSTON LEGAL, among others) co-created MONDAY MORNINGS with fellow executive producer Dr. Sanjay Gupta. After a morning Q&A panel at the Television Critics Association press tour, Kelley takes a moment to talk about the challenges of doing a medical show and what he hopes viewers will derive from it.

KELLEY: I guess I’d like them to know that if they sample it and watch it, they’ll be entertained and moved. I think that what will be incumbent upon us to get out there is that it’s different from other medical shows. Because a medical franchise – it’s not reinventing the wheel. They’ve been done before, they’ll be redone in perpetuity. But this wheel has very different spokes and it’s very different and the signature piece of this series is going to be that Morbidity and Mortality Conference. We go behind the veil and doctors really get quite Socratic with each other with respect to their individual practice of medicine.