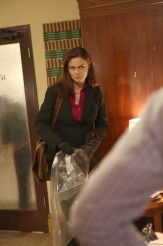 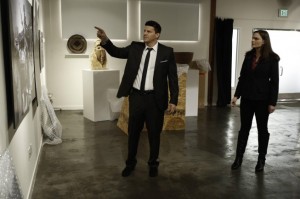 The title of the BONES episode “The Survivor in the Soap” is a trifle contradictory, since the body in the soap has stopped surviving before the story proper starts. Otherwise, this is one of BONES’ better issue-oriented segments, tying the mystery of the week into the horrific tragedy of child soldiers being conscripted in Sierra Leone, Africa.

When human remains are discovered in a trash barrel, where chemical agents have turned the flesh into a soap like compound, Booth (David Boreanaz) and Brennan (Emily Deschanel) investigate. The victim is revealed to be Symchay Conteh, a legal immigrant from Sierra Leone who was forced into one of the armies as a child and made to perpetrate atrocities. Once given refugee status within the U.S., Simchay had helped his fellow immigrants, including a friend, Brima (Kareem Grimes) whose legal problems caused him to be deported. Brima is now in the country illegally, but swears he didn’t harm Symchay.

It turns out that Symchay recognized the maintenance man in his building as war criminal Josheph Mbarga (Ntare Guma Mbaho Mwine), who was the officer responsible for conscripting Symchay into the army when he was a boy. When Symchay tried to report this to his immigration lawyer Wilford (Adam Kulbersh), Wilford murdered Symchay, as the attorney has been receiving kickbacks from Mbarga. Wilford is arrested, while Brennan – who speaks the primary language of Sierra Leone– makes big promises of help to everyone in Wilford’s waiting room, much to the distress of Booth’s State Department colleague Alex (Danny Woodburn).

Back at the lab, Arastoo (Pej Vahdat) feels a very personal connection to the case, as his cousin was taken away to be in the army in Iran. Arastoo is also feeling the strain of keeping his relationship with Cam (Tamara Taylor) a secret. Arastoo, stressed out, gets into an argument with Hodgins (TJ Thyne) and Cam finds herself having to pull rank on her boyfriend. Once the case is solved, Cam and Arastoo decide to break lab protocol by declaring they are in a relationship to their colleagues (most of whom already know, but pretend they didn’t).

Meanwhile, Brennan and Booth bicker over where to go on vacation, with Brennan finally finding an ideal destination that will allow her to do research and Booth to relax on a beach with a drink.

“The Survivor in the Soap” is ambitious, but unlike some other topical episodes, it is able to accomplish much of what it sets out to do, starting with introducing viewers who may not know about the horrible phenomenon to the topic of conscripted child soldiers. It’s not documentary-deep, but it certainly gets the point across and may inspire some people to research the subject more thoroughly. The mystery is good, with plausible clues, motives and detection.

Given what we have been told about Arastoo’s background, his reaction to the case is not farfetched, and it provides for several good scenes between series regular Taylor and recurring actor Vahdat as their characters try to navigate the tricky shoals of affection, pride and professionalism.

At first, it seems unlikely that, after all this time and all this getting to know each other, that Brennan and Booth would really be so far apart in their vacation planning. But on further contemplation, it is true that Brennan’s emphasis on education and study has always been matched by Booth’s certainty that Brennan will come around to his idea of relaxation any day now, despite all evidence to the contrary. This aspect of the episode can therefore be seen as proof that the two main characters here haven’t changed all that much for each other, which is probably a good thing – true love is great and all, but we wouldn’t want either character to lose the distinctive identity that makes BONES what it is.