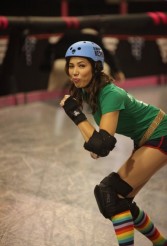 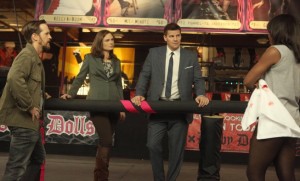 There are three subplots in the BONES episode “The Doll in the Derby,” and none of them mesh together very well. When the victim of a particularly gruesome death is determined to be a roller derby star, Angela (Michaela Conlin) goes undercover as an aspiring skater in order to infiltrate the deceased’s team. Angela winds up actually winning a slot on the squad, gets drunk with a teammate, kisses Booth (David Boreanaz) romantically to explain his presence at the bar and generally has a good time.

At the same time, lab assistant Wendell Bray (Michael Grant Terry) is approaching his twenty-ninth birthday and suffers some razzing from Hodgins (TJ Thyne), though Hodgins finally congratulates Wendell on being pretty successful. Additionally, when Hodgins presses Wendell too hard on his “bucket list,” it turns out that Wendell once posed nude for Angela back when the two of them were dating – during the period when Angela and now-husband Hodgins had broken up. Hodgins has a bit of horror about this.

Finally, Booth is making secretive trips to the hospital. Angela and Cam (Tamara Taylor) find out, but neither Booth nor Brennan (Emily Deschanel) will tell them what’s going on. Finally, Brennan shows Cam that Booth has staged a carnival for children suffering from cancer as a benefit for the (real) Children’s Tumor Foundation.

There’s a sound argument to be made that if you’ve got a show that’s been on the air for eight years, you might as well use it to promote worthy causes. However, the way it’s handled in dramatic terms here is a bit clumsy. Brennan’s explanation that the devoutly Catholic Booth interprets the Biblical injunction about charity to mean that he isn’t supposed to discuss it is fair enough; Booth behaving in a way that causes his coworkers to suppose that he or one of his children is seriously ill is simply awkward. Indeed, it seems like he’d want to tell them about the carnival, without necessarily telling them he personally created it, so that they might donate to the foundation. The inclusion of and directing attention toward the Children’s Tumor Foundation is laudable, but trying to attach a big mystery to it doesn’t work here.

It’s always fun to see Hodgins teasing anybody, but the interplay with Wendell gets a little meaner than the situation warrants, so that our normally playful Jack seems a bit like a bully before all is said and done.

As far as Angela getting into the roller rink, the potential here goes largely untapped. She says she’s happy to get out from behind her computer, but for better or worse, we don’t get too much sense of what the outing means to her – whether she enjoys this new expression of physicality or whether she’s relieved to be able to put away her kneepads at the end of the episode.

The culprit in the episode turns out to be one of the victim’s teammates, who resented the deceased for being a locker room kleptomaniac. It’s also a bit of a stretch that this particular character as she’s portrayed, regardless of what we’re told of her background, would be able to perpetrate such a messy body disposal.

“The Doll in the Derby” has some nice segments, but it doesn’t feel all of a piece.