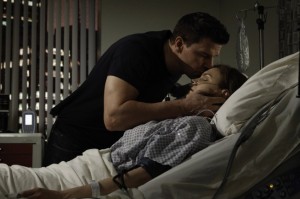 BONES generally lets Brennan (Emily Deschanel) be as firm in her atheism as Booth (David Boreanaz) is in his Catholicism, so some viewers may be discomfited at this tilt in favor of spirituality, if not any particular religion. However, “The Shot in the Dark” is at least gentle in its magical realism. Better still, to a large extent, the script by Darcy Thomas and direction by Francois Velle trust the actors rather than dialogue to convey the deeply-felt emotions in the episode.

Working late at the lab after a fight with Booth, Brennan is shot and left for dead by a person unknown. Booth, coming by the lab to apologize, finds Brennan on the floor bleeding out. Brennan flat-lines in surgery for two minutes – she experiences this as time in her childhood living room with her mother Christine (Brooke Langton), who recalls advising an emotional teenaged Brennan to use her head instead of her heart. Christine now says that Brennan should be more open to her emotions. Brennan believes she’s hallucinating, and wants to get back to Booth and their infant daughter Christine, but acknowledges that she loves and misses her mother.

Meanwhile, Cam (Tamara Taylor), one of the surgeons who participates in operating on Brennan, cannot find any trace of the bullet that shot Brennan. A security guard was shot and killed in the same attack, and there’s no trace of a bullet or exit wound in his corpse either. Hodgins (TJ Thyne) finally deduces that a bullet made of frozen blood was used and the killer (a Jeffersonian art expert who has been selling paintings and making copies so that the gallery won’t know the different) is arrested when his DNA matches foreign blood found in Brennan’s system.

Booth and Brennan’s father Max (Ryan O’Neal) are at her bedside, very worried. Max is astonished when Brennan reports that Christine – Max’s late wife – says that she always knew Max’s first gift to her was stolen. Max thought he was the only one who knew that – certainly Brennan didn’t.

There’s another visual clue that the episode is firmly on the side of existing otherworldliness – after Brennan wakes up and disappears from the living room, the camera holds for a moment on mom Christine. Thankfully, the point is hammered no harder. Even better, Booth’s obvious fear for Brennan’s life and well-being is conveyed largely by Boreanaz’s performance, rather than speeches. Brennan has rather more dialogue with her mother, but what sells the relationship is Deschanel’s performance. The episode follows the cardinal rule of good storytelling – it shows rather than tells.

The blood bullet is rather ingenious, as the ice bullet (this viewer’s first guess when we learn that neither shooting victim contains a findable slug) is proven by Hodgins to be impractical; it seems plausible, albeit potentially deadly in other ways. (Presumably this episode’s malefactor isn’t carrying any fatal diseases.)

“The Shot in the Dark” is BONES in a very good light.