Okay episode with a message that doesn’t entirely match its methods, but is at least incorporated into the main plot 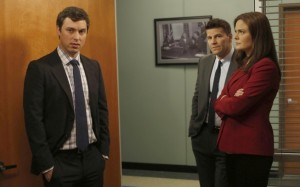 As with the recent BONES episode “The Doll in the Derby,” “The Friend in Need” has a worthy message. This time it’s better situated within the main storyline, though the matter is so serious that it seems to warrant heavier treatment than BONES can provide to guest characters.

In “The Friend in Need,” a badly decomposed and smashed-up body is found inside a suitcase that was thrown from a bridge and subsequently washed up on a riverbank. The remains belong to fifteen-year-old Manny, a smart but isolated youth last seen alive at a party where the drug K was circulating.

Manny’s neighbor and one-time friend Kat (Lizze Broadway) finally comes forward to Sweets (John Francis Daley) and tells him that she was drugged and raped at the party, but doesn’t know who her attacker was and that her mother has dissuaded her from going to the police. Sweets goes to Booth (David Boreanaz) and Brennan (Emily Deschanel) with the information, and Booth in turn contacts the D.C. police. Kat feels betrayed, but her information leads Booth and Sweets to capture the rapist, Nick (Nick Thurston) who is also Manny’s killer. The two young men were involved in cloning cell phones and the last client paid in drugs. When Manny found that Nick had assaulted Kat, Manny hit his business partner. Nick hit Manny back – because Manny had health issues, the punch caused Manny to stop breathing. Nick panicked and stuffed Manny and the drugs into the suitcase. Booth tricks Nick into confessing to the rape and easily charges him with the murder as well.

Meanwhile, lab assistant Finn (Luke Kleintank) uneasily agrees to let his girlfriend Michelle (Tiffany Hines) spend the weekend with him without telling her adoptive mother that she’s in town from college – even though Michelle’s mom is Cam (Tamara Taylor), Finn’s boss at the lab. Finn can’t bear keeping the secret, so he tells Cam, who at first tries not to let Michelle know that Finn confessed, but then Michelle confrontsCam, who confesses that Finn told her. Mother and daughter agree to be completely open with each other, which leadsCamto discuss her relationship with Arastoo (not in the episode) with Michelle.

“The Friend in Need” has some snappy dialogue, especially at the beginning of the episode, where the lab workers wonder if the body in the suitcase is the result not of murder, but rather a stunt gone wrong. Cam says, “You’re suggesting the cause of death was stupidity?” Finn replies, “It wouldn’t be the first time.” It’s moments like this that win our hearts all over again.

The Cam-Michelle-Finn truth-and consequences subplot actually has promise, but it’s never quite as punchy as it could be. Conceptually, it’s both droll and observant that every time any two of them talk with one another, it generates another layer of potential secrecy, but it plays out more mildly than the possibilities suggest that it might.

As for the main story, the mystery is decent and the message that rape should be reported is a worthy one. It is, however, slightly undercut by the fact that most rape victims aren’t likely to get the near-immediate results that Kat does in having their attackers brought to justice. In other words, this particular story isn’t the strongest possible example of why people reluctant to come forward should report a sexual assault to the police Still, at least this is part of the main storyline (as opposed to a subplot only revealed at the climax, as with “Doll”). Deschanel appearing at the end of the episode and giving the contact information for a national sexual abuse hotline can only help anyone who has been assaulted.