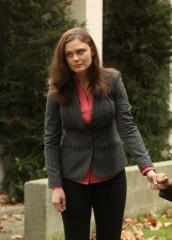 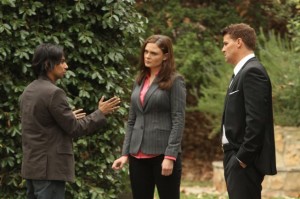 Brennan (Emily Deschanel, C) and Booth (David Boreanaz, R) talk with Akshay Mirza (guest star Vik Sahay, L) after he learns of the death of his business partner in BONES "The Twist in the Plot" | c) 2013 Patrick McElhenney/FOX

The title of the BONES episode “A Twist in the Plot” is in fact a pun, referring to the premise that a burial plot contains two corpses, rather than the single body that was meant to be interred there.  Since the site of the plot – in publicly-used land – is a big plot point, our regular characters get to thinking about what they want done with their Earthly remains. There’s also the matter of Sweets (John Francis Daley) and Daisy (Carla Gallo) getting together to gingerly examine their concluded romance.

The intended occupant of the grave reportedly had died of cancer, with the additional body turning out to be that of the woman’s “death consultant,” who helped her through her final days. Suspicion falls on the consultant’s business partner/ex-lover (Vik Sahay, lately of CHUCK, doing strong work as a grief-stricken, pissed-off suspect) and a competitor (John Rubinstein). Then Daisy discovers that the woman didn’t die of cancer after all, but rather of an overdose of the recreational drug known as “bath salts.” Booth gets the deceased’s husband to confess that he hastened her death at the same time he was having an affair with the death consultant, whom he killed when she broke up with him.

Meanwhile, Booth is appalled by Brennan’s (Emily Deschanel) stated plans for her own funeral rites – she wants a “sky burial,” where her remains will be broken up with a hammer and left for vultures to eat. Booth videotapes a goodbye message for baby daughter Christine, which so moves Brennan that she jumps into the shot. Brennan tells Booth that she’s taken his feelings into consideration and changed her will – now Booth and Christine can dispose of her remains in a volcano. (Booth is nonplused, but seems to find this better than hammers and vultures.)

The character moments, the plot mechanics and the science all work harmoniously here, with Hodgins’ (TJ Thyne) discovery of toxins in the dead woman’s system via obesity in beetles (this makes complete sense in context) letting us feel like we’re learning something.

The wrap-up of the Sweets/Daisy relationship is handled with decency, intelligence and reasonable brevity. It also helps that Daisy has been allowed to grow, becoming notably more mature and calm, which in turn allows Gallo to demonstrate that she can persuasively play a normal professional as well as the overly perky figure that Daisy has been previously.

There’s nothing earthshaking in “The Twist in the Plot,” but the twists and the plot work very well.

Article: BONES – Season 8 – “The Corpse in the Canopy”