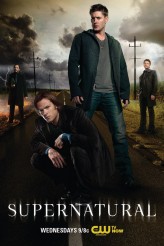 One of the elements that makes SUPERNATURAL what it is involves Winchester brotherly love. This can take a number of forms, but one of the most visible and recurring is self-sacrifice – even when it’s a big stretch. This time around, it’s Dean (Jensen Ackles) making like the Mr. Fantastic of logic, taking a situation that calls for survival if it’s going to mean anything and turning it into a suicide mission so that Sam (Jared Padalecki) can live a normal life. In another series, this might be obnoxious. Here, it’s just the lay of the land.

In “Trial and Error,” poor Kevin Tran (Osric Chau) is getting nosebleeds and malnutrition, but he tells Sam and Dean he’s found the solution to closing the Gates of Hell. It involves three trials of the Herculean variety. In the first one, a hero must kill a hellhound and bathe in its blood.

As hellhounds tend to serve crossroads demons, Sam finds a suspicious case of good luck from ten years ago at a Southwestern ranch, indicating somebody sold their soul and it’s almost time for collection. Sam and Dean hire on as ranch hands, shoveling manure of both the literal and figurative varieties – the struck-it-rich Cassidy clan are a bunch of backbiters. It turns out that the demon who passed through town was Crowley himself, and he didn’t just nab one soul – he got two Cassidys, the husband of a third and the ranch manager to boot.

Dean decides that this is clearly one of those situations where either he or Sam will get killed, and all Dean wants out of life is a happy ending for Sam. Dean gives Sam the big, heroic let-me-do-this speech and orders Sam not to help him, or Dean will shoot him in the leg. However, the hellhound gets the better of Dean and it’s Sam who manages to best the beast. Sam says he’s going to undertake the other two trials as well, and wants them both to live through it.

First of all, good for Sam for not sulking. Given that Dean is enjoying having his own room for the first time in his life at the Men of Letters hideout, it’s nice to see him in a good mood (at least at the beginning of the episode) and it’s a relief to know he can cook a decent hamburger when given the proper surroundings.

The twist of having four different soul-sellers, all with somewhat different motives, works pretty well, with Danay Garcia likable as the ranch manager the Winchesters are able to rescue, at least for now.

Chau is strong as always.  We’re set up to be worried that Kevin is going to die of exhaustion, stress or possibly a drug overdose, now that Dean has provided him with pep pills. (Sedatives would have been a better idea.)

Now that it’s known SUPERNATURAL has been picked up for a ninth season (congratulations, folks!), there is the meta question as to whether the quest can succeed, not because Sam and Dean aren’t up to the task, but because it’s unclear what they’ll be doing next year if the Gates of Hell are locked. There are a number of possibilities if they succeed, but alternatively, the quest may extend into next year. We’ll see.

Meanwhile, “Trial and Error” is a pretty good episode, mixing a nice bit of SUPERNATURAL procedural with its trademark sibling dynamics.