The actor also expresses his love of SUPERNATURAL fans 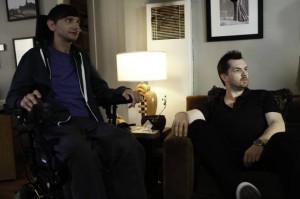 In LEGIT, the new half-hour comedy created by Jim Jefferies and Peter O’Fallon on FX, Thursdays at 10:30, Jefferies’ character Jim is trying belatedly to grow up. One of his friends is Billy, a quadriplegic who has muscular dystrophy, played by DJ Qualls.

Qualls, whose initials stand for Donald Joseph, is an uncommonly lanky native of Tennessee– he’s 6’1” and weighs about 140 pounds, the after-effects of surviving cancer in adolescence. Qualls has been appearing in feature films since his career-making co-star turn in 2000’s comedy ROAD TRIP, with credits as varied as THE CORE and HUSTLE & FLOW, with PAWN SHOP CHRONICLES – also featuring Norman Reedus (of THE WALKING DEAD), Paul Walker (of FAST & FURIOUS) and Qualls’ FX stablemate Elijah Wood – due out later this year. On TV, Qualls was a regular on MEMPHIS BEAT.

Currently, Qualls recurs as the helpful but laid-back Garth Fitzgerald IV on SUPERNATURAL. He sounds as excited about that gig as he does his work on LEGIT – which is saying a lot.

ASSIGNMENT X: As you’re playing a quadriplegic, can you talk about not being able to move while the cameras are rolling?

DJ QUALLS: I [originally] turned down this job because of that. I was like, “First of all, how can I drive any action? I can only move my head, my back a little bit, and my neck.” It’s really odd. They say I’m acting with about thirteen inches from the top of my head down. It’s really difficult. But it’s been so fulfilling. This is the most fun I’ve ever had on a job. FX lets you alone. There are only two words in the whole English language you cannot say on FX. 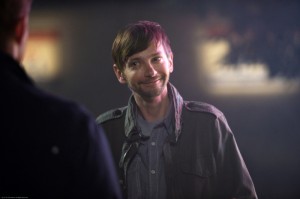 AX: One begins with F and one with C?

QUALLS: Yes. Those are the only words you can’t say. We will never syndicate off-network, because our shows would be five minutes long [due to cuts for language].

AX: So were the LEGIT people able to allay your concerns about the action?

QUALLS: Yes. The writers have really found a way to work me into every scene. [Jim] is doing such terrible things, we need a little sweetness in the show. But as the character has evolved, I’m becoming more like Jim. It’s very interesting to be this guy who has such limitations, and to show him as a normal man, with the same wants and needs a man has. And they’ve worked him into a real person. I think he’s evolved with the show. I get to give a lot of s*** – we make enemies in a couple of episodes. It’s real male relationships.

AX: The first episode involves Jim and Steve, the third regular played by Dan Bakkedahl, getting Billy to a house of prostitution so that he can have sex. Is Billy able to function sexually?

QUALLS: Oh, yes. With muscular dystrophy, your muscles atrophy, but your p*nis is not a muscle. The blood flow is fine. And my character has almost a ten-inch p*nis, and that’s explored a lot in the series. It’s a running theme in the show. I mean, imagine how terrible that would be, to be blessed with a giant p*nis and not be able to do anything about it. It must be so frustrating. 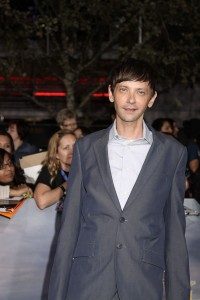 QUALLS: We don’t cut on our show. I met our editor [Rick Weis] and he said the first [episode of LEGIT] that he ever edited, he almost started crying, because we have a record for a forty-seven-minute take. We just go and go and go. We never cut. They don’t know where the edits are, so it’s a really hard show to edit. Peter [O’Fallon], our co-creator and director, his style is chaos. We all know our lines when we arrive at work. We basically go and we just play around until we find the rhythm of the scene. It’s really crazy, because we have no budget, and we’re able to do the show in four days. I’ve never seen anything like it. It’s so creative. And the other thing I love about it is, we use our script as an outline. We rarely stay with our scripts. It’s so freeing as an actor to be able to [improvise] – you know your character after three episodes.

AX: How many cameras are rolling on the takes?

QUALLS: We had Marlon Wayans [as a guest star] and he had to be out in four hours, so we used three. On heavy days, we use three cameras. But it’s [usually] just two cameras. And Peter shoots the s*** out of our scenes. We do them like forty times. I’ve never done anything like this.

AX: With a forty-seven-minute take, how many minutes of that do you have to cut out of the episode?

QUALLS: Our episodes are like an hour-and-a-half long [as rough cuts], and we cut them down to forty-two minutes. That scene was three pages long, so it’s like two minutes of the show – we shot forty-seven minutes of one take. And we did multiple takes.

AX: Do you know if it’s all going to be on your deleted scenes on the home video release?

QUALLS: I can’t wait for our DVDs’ deleted scenes. I want to go more than one season just so we can make DVDs to show what goes on. It’s funny, because we’re like real-life brothers – the three main characters are all boys, we fight in the middle of scenes and they’re rolling. “F***you.” “No, f*** you.” “Stop stepping on my toe.” But we love each other.

AX: If you have to lay there while the cameras are rolling for forty-seven minutes straight, does that hurt you?

QUALLS: Your balls will never itch more than when you can’t move your hands for forty-seven minutes. My face, my nose – it’s torture.

QUALLS: I’m recurring on SUPERNATURAL still. I’m the new Bobby [the character who the regulars turn to for information] on SUPERNATURAL. They’ve been keeping my character alive by phone calls, but I’ve been off the show – but I’m going back. I’m having the most fun of my life. I’m on two shows that couldn’t be more different, and I have a blast on both of them. The fans on SUPERNATURAL, I will say, though, are the most rabid fans you will ever know. I had two thousand Twitter followers when I started SUPERNATURAL – four episodes in, I have forty thousand followers. And they’re all SUPERNATURAL fans.

AX: Are you ever tempted to ask the fans to go out and do something for you?

QUALLS: You know, it’s funny – they offer to do things for me. I’ll be like, “I’m at So-and-So’s place.” They’re like, “I’ll come over if you want,” or “I’ll make dinner for you if you’re in town.” So it’s wonderful. They send me drawings. I do the convention circuit and, basically, you hold people while they cry. There’s nothing more flattering than somebody who bursts into tears by you just being in a room. SUPERNATURAL is something I could never have expected. I really couldn’t. It means nothing to my career as far as Hollywood cares about, but I don’t care about that. People are worried about their legacy and what they’re leaving behind – I worry about what’s happening now. If you do something that means that much to so many people, that’s why I do what I do. I don’t care what Hollywood thinks about it. I’m doing all the European conventions this year, and several domestic ones. It’s a joy. To go and meet people that love what you do, you can’t ask for more.