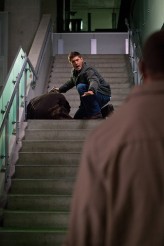 Oy gevalt, it’s a golem – in an entertaining episode 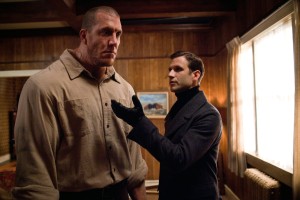 If you’re Jewish, a student of folk mythology or both, chances are good you’ve heard of the golem. If you’re not familiar with the golem, the SUPERNATURAL episode “Everybody Hates Hitler” is here to enlighten you – sort of, as writer Ben Edlund has tweaked the concept to the benefit of the story.

A prologue puts us at a Nazi camp in 1944, where something manlike but enormous and unkillable breaks through the walls and starts breaking people. The Commandant (Bernhard Forcher) manages to escape in a burst of flame.

In the present, Sam (Jared Padalecki) and Dean (Jensen Ackles) find the hideout that their late grandfather Henry told them about. It was once the headquarters of the Men of Letters, and now serves as a great library/new home for the boys.

An elderly rabbi (Hal Linden – yes, of BARNEY MILLER fame) leaves a message for his grandson, then is magically burned to death by a young Nazi, standing some distance away.

Sam and Dean show up to investigate and soon meet Adam (Adam Rose), the grandson of the rabbi. The rabbi had been part of the Judah Initiative, a WWII group of Jewish mystics who were combating the Nazi Thule Society. The secret conflict has spilled into the present. Alas, Adam didn’t believe that his grandfather’s stories about WWII were true, and now he has inherited Grandpa’s cranky golem (John DeSantis, who previously played Freeman Daggett in the “Ghostfacers” episode). According to legend, a golem is made out of clay by rabbis to combat the enemies of the Jewish people. (Golems tend to show up in stories fromEastern Europe.) This golem, unlike the ones in the folk tales, can talk and he is seriously annoyed that Adam not only isn’t a rabbi, but can’t “take charge.” Adam long ago smoked his grandfather’s instruction manual for the golem – how was he to know it was real? – and doesn’t know how to do this.

Back at the hideout, Sam seems to be taking on the mantle of a Man of Letters – and this is okay with Dean. For once, the boys settle down in what is not just resignation but actually (for them) reasonable contentment.

First of all, congratulations to SUPERNATURAL on finding a role, small but significant, for the lately-underusedLinden, who makes a memorable impression as the heroic rabbi. Second, congratulations to episode writer Edlund, who does something logical but unexpectedly funny with the golem, whose kvetching at his new boss sounds like a disappointed grandparent. Praise is also due to actor DeSantis, who is deadly serious and dignified, yet also deeply humorous. We understand when, for once, both Winchesters are in agreement on their hesitation to gank him for being supernatural and dangerous (but again, see the episode’s title – the golem has been on the right side of things so far). Kudos also go to director Phil Sgriccia for continually finding new ways to emphasize the golem’s massive stature in contrast to the mortals around him.

Rose is also a strong performer, both when he’s pretending to flirt with a discomfited Dean and when he’s explaining his history with Grandpa and the golem. Forcher is coolly confident and menacing as the Commandant.

As for our regulars, though no doubt something awful will happen to the new hideout, for now it’s nice to not only see the characters being comfortable and in a good mood, but seeing Padalecki and Ackles getting to play Sam and Dean being comfortable and in a good mood. It’s an entertaining change and it’s nice to see that apparently all parties concerned are still having a good time here.