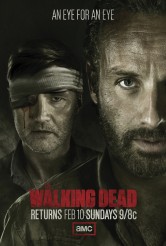 In the ninth episode and mid-season premiere of THE WALKING DEAD Season 3, “The Suicide King,” Rick (Andrew Lincoln) and company interrupt a Woodbury arena battle between Merle (Michael Rooker) and Daryl (Norman Reedus)…but where do Merle’s loyalties really lie…or Daryl’s? And as Andrea (Laurie Holden) finds herself stepping up to draw a fracturing Woodbury back together while the Governor (David Morrissey) prepares for war, Rick brings Glenn (Steven Yeun) and Maggie (Lauren Cohan) home only to discover some newcomers that may help in the upcoming conflict…if he can bring himself to trust anyone again.

When we left the show last year, the Governor had suffered the loss of his daughter (again) and an eye at the hands of Michonne (Danai Gurira), and then pit brother against brother in battle to the death while Rick and his team struck the first blow against Woodbury in a battle that…well, hadn’t really begun until our ‘heroes’ attacked first. I know it’s often unpopular to say, but in this TV version at least, not only is the Governor far more sympathetic as a character (more on that in a minute), but Michonne is irrationally against him based on little evidence. She would have had to read the WALKING DEAD comics to hate him as much as she does or to do the things she did to him in the mid-season finale. But here we are, with Rick and Co. starting a war with another survival community that some might argue has it a hell of a lot better than a few folks holed up in an old prison. No matter how we got here, we’re here. Now what?

Well, first we get what feels like a rather weak resolution to the cliffhanger, and then a very slow and almost uneventful episode. While it does move things incrementally forward on several character fronts, it feels more like one act in an episode than an entire installment; at some points it almost feels like the episode is working really hard not to have anything happen. That might not be horrible in the middle of an ongoing run, but as a mid-season premiere, it lacks excitement and punch and doesn’t do much to reinvest us in that world. Granted if you’re already a fan, you don’t need much help, and arguably despite the modern marketing move of making these “mid-season” breaks such a big deal, this is just episode nine.

Our reunion with everyone might be summed up by one word: loyalty. In all of the relationships and associations explored in this episode, it all comes down to loyalty and who sides with whom. For Daryl, blood is still thicker and Merle means home, even if that also means abandoning the group with which he’s become so close. For Tyreese (Chad Coleman) and his group, it means staying together while trying to forge a new bond in a world that’s “making the living less like the living” (one of the series’ better all-in-one thematic quotes). Michonne hasn’t done much to instill trust in Rick, and he’s ready to cast her out, but he also faces rebellion from Glenn, whose anger at recent events overflows (finally!). And for the Governor, his fragile Woodbury community threatens to collapse as zombies attack in the aftermath of Rick’s terrorist attack.

So…the Governor. If he’s supposed to be anything like the villain he was in the comics – and yes, he’s clearly been seen doing some questionable if not flat-out unsavory things in past episodes – he just isn’t coming across that way. Even the worst things he’s done only seem bad from our perspective, in our cozy homes watching our cable TV and living in a pre-apocalyptic society. There in the world of the walking dead, the Governor has made hard choices intended to keep Woodbury safe and yes, perhaps to keep his position of power as well, but the results speak for themselves. And even at his lowest ebb so far, he still emerges from his self-imposed exile in his apartment, puts a bullet in the head of a suffering zombie attack victim, and walks back in without a word. The man gets the job done, and I have no problem (given her own emotional background) with Andrea’s devotion to him and to the community he’s created. One might argue that as the intended antagonist of the show’s ostensible lead and hero, Rick, the Governor just might have been written with a bit too much nuance in this incarnation, since I find him often more compelling and sympathetic than our 21st century cowboy. The comments are below where you can yell about how crazy that is.

Strong character moments are largely owned by the female characters this time, especially Andrea, who steps up with a leadership moment when she rallies Woodbury under the watchful – and perhaps approving? – eye of the Governor. Carol (Melissa Suzanne McBride) not only has a nice quiet bit with Carl (Chandler Riggs) about the silence of the new world but one with Beth (Emily Kinney) about memories of her former family and the legacy of abuse. And as further evidence that this show excels at the simple touches that make a series so emotionally resonant, Hershel (Scott Wilson) has a touching scene with Glenn where he tells him that the young man has become “like his own son.”

We also get a tense finale as Rick attempts to fight Hershel on accepting Tyreese and his friends into the group, only to freak out completely as an apparition of Lori (Sarah Wayne Callies…yes, it was her) shows up and everyone thinks he’s yelling at the visitors to leave. But as Rick takes out his frustration and rage and doubt on the image of his dead wife, where will that leave him psychologically as war with Woodbury looms?

I’m putting money down on the Governor now; any takers?