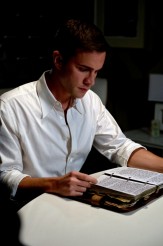 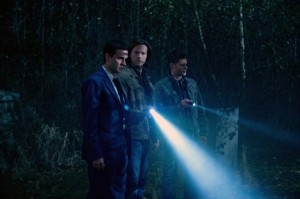 Gil McKinney as Henry, Jared Padalecki as Sam, and Jensen Ackles as Dean on SUPERNATURAL "As Time Goes By" | (c) 2013 Ed Araquel/The CW

By now, we know quite a lot about Samuel, the father of Sam (Jared Padalecki) and Dean’s (Jensen Ackles) late mother Mary. However, all we’ve known until now about their paternal grandfather, John Winchester’s dad Henry (Gil McKinney), is that he ran out when John was still a child. Or so they thought. As we see in the SUPERNATURAL episode “As Time Goes By,” it turns out that Henry is part of the big picture.

In 1958, Henry is a doting dad and an aspiring “Man of Letters.” In this case, a “Man of Letters” is a master of occult lore who advises the Hunters. Poor Henry’s induction ceremony is interrupted by the demon Abaddon in female form (Alanna Hoffman). Henry’s efforts to get rid of Abaddon send them both to 2013, where Henry tumbles out of the astonished Sam and Dean’s closet.

As might be expected, all parties are astonished. As might be expected on this show, once the truth is known, Dean gives Henry a hard time about putting his world-saving aspirations over being a parent, but when Henry takes Dean’s words to heart and tries to go back to the past, Dean stops him, since this might make things even worse. Henry has with him a tiny codex of all lore pertaining to demons. Abaddon wants to get her hands on it. Dean devises a way to put Abaddon out of commission – trapping the demon in her human body and then decapitating her, which means she’s stuck in the helpless head – but Henry is fatally wounded in the course of the plan. Sam and Dean bury their grandfather, wonder if John would have been a better father and a happier man if he had not wrongly believed he’d been abandoned, but conclude that John did his best as a parent and as a man.

The “Men of Letters” mythos seems interesting, although so far as we know, they no longer exist (Abaddon, you jerk!), so it’s unclear if that story element will resurface.McKinneydoes a good job as a prim and proper fellow who knows he’s out of his depth but gamely fighting the good fight, even as he is extremely confused by the brave new world where he’s landed. Episode writer Adam Glass wisely doesn’t hit the time travel jokes too hard, but doesn’t avoid the topic either.

As for Sam and Dean, they seem to be rotating back to their original roles, with Dean angry and defensive and Sam more willing to cut their grandfather some slack. Since it’s pretty clear to us as viewers why John never saw Henry again, it does seem like Dean is pretty slow to come to the obvious realization about the subject, but Ackles plays all of his character’s conflicting emotions with conviction.

Abaddon’s fate is brutal and new to the show – we haven’t seen a demon trapped in a severed human head before, at any rate. It seems like a method Sam and Dean should employ more often in order to prevent any one demon from coming after them repeatedly.

Since neither we nor Sam and Dean have a lot of time to bond with Henry, the events of “As Time Goes By” are more wistful than gut-wrenching, but the episode is reasonably effective.