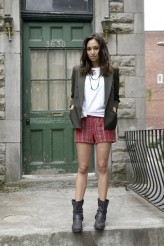 The actress talks about Sally's resurrection and possible romance 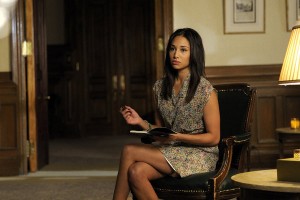 On the North American version of BEING HUMAN, now in its third season Monday nights at 9 PM on Syfy (the British version it is based on, more and more loosely, was created by Toby Whithouse), three roommates live together in a Boston brownstone. Aidan, played by Sam Witwer, is a vampire. Josh, played by Sam Huntington, has been a werewolf (more about that in the upcoming interview with Huntington). Sally Malik, played by Meaghan Rath, is a ghost – or at least she was until Sam and his werewolf girlfriend Nora (Kristen Hager) use a witch’s spell to resurrect Sally back into her own body. Sally is alive again, though whether she’s strictly human seems up for debate.

There’s no doubt, however, about Rath’s joy in getting to talk about the changes in Sally. The Montreal-born actress, previously a series regular on 15/LOVE and THE ASSISTANTS, is assured this interview will run only after the Sally’s big revival episode airs, so she is as candid as she can be without spoiling future BEING HUMAN storylines.

AX: Were you ever expecting for Sally to become alive again?

MEAGHAN RATH: No, but it is nice to talk about this, because it’s like a secret I’ve been having to keep for a long time. Yeah, I was surprised. I remember having a conversation with Anna Fricke, our show runner [who created the U.S. version with her husband Jeremy Carver], back in May, when they first started writing the scripts, and she was telling me the arc of my character, and I could not believe that they were bringing her back to life. I mean, it was always a dream – just like it’s a dream for Sally – but I never thought they’d actually do it and I couldn’t be happier.

AX: I guess it would be a big spoiler to ask if she remains alive?

AX: On the British BEING HUMAN, there was a romantic interest between the ghost character and the vampire character. Now that Sally’s corporeal, any possibility of something like that between Sally and Aidan?

RATH: Well, without ruining anything, I would say, it’s so smart, the way they write it, because they do toy with the idea a little bit. There are some teases and I’m not going to say what happens, but it’s really interesting, because it’s like all of a sudden there are two people who live together, a guy and a girl, and they never thought of it as an option before, and all of a sudden, it’s very real, and it’s like, “Oh.” You have that night of drinking and you’re with your roommate, and is there some kind of spark, and it’s really an interesting direction that they sort of explore a little bit.

AX: Sally has gone through a lot of changes even while a ghost. Do you have any preference for playing her when she’s being reasonable, when she’s really guilt-ridden or when she’s out there being homicidal, or at least literally ghost-busting?

RATH: It’s always fun to do the crazy stuff that’s full of action. That’s just fun as an actor to do. But my favorite Sally is when she’s kind of assuming who she is and is strong and is making decisions that show that she’s learned from previous bad behavior. I like seeing growth in her the best.

AX: How about changes in other characters?

RATH: You actually get to see Aidan be funny this year, which is really nice to see.

AX: How has Comic-Con been? How have you enjoyed the rock star experience?

RATH: It’s amazing. It’s like a different planet. I think all of us [in the BEING HUMAN cast, crew and creative team] feel the same way when we say we love meeting the fans and just seeing what they have to say about the show and in my experience, it’s all been really, really nice, genuine down to Earth people who are intelligent, and it’s really nice to know that we’ve touched them in some way. It makes me happy.

AX: And do you guys have any favorite guest stars you’ve gotten to work with that we’ve seen so far?

RATH: Mark Pellegrino is one of our all-time faves. The Hall of Fame of BEING HUMAN. He’s amazing. This year, Amy Aquino has been fantastic. She plays Donna the witch. She’s such a powerful actress and she’s so grounded and so inspiring to watch. And just a lovely person to be around. And [upcoming guest star Deanna Russo] is fantastic. I love her.

RATH: Yeah, I do – I just finished shooting a film called THE WHITE BUFFALO. It’s a small little indie. Sam Huntington plays my husband. It’s really just a beautiful script and it’s about a guy who’s married to a younger woman, so that’s me and Sammy, and he takes me to this bed and breakfast for the weekend to rekindle their romance that’s gone stale, and the woman that’s managing the bed and breakfast and who owns it is one of his ex-girlfriends who he’s been secretly obsessed with for years, and Emmanuelle Chriqui plays her. It’s really a lovely movie.

AX: What would you most like people to know about BEING HUMAN right now?

RATH: Everything is at its best. The writing, the acting, the directing – it’s fresh and it’s what the show is really about.