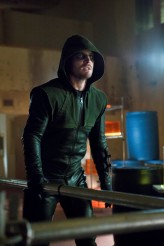 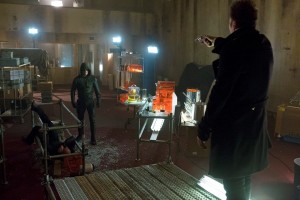 ARROW stumbles a bit this week with “Vertigo,” a wildly uneven episode that features a few nice moments, but far too many problematic ones to go along with them.  With Oliver Queen (Stephen Amell) struggling to protect his younger sister Thea, (Willa Holland), from the consequences of her own impulsive behavior, Oliver compensates by trying to take down the drug dealer who created vertigo, the titular new designer drug that Willa had taken before wrapping her car around a tree in the last episode.  To do so he enlists the help of Detective McKenna Hall (Janina Gavankar) an old friend from his party boy days who now works under his nemesis, Detective Quentin Lance (Paul Blackthorne), at the Starling City Police Department.  Oliver also attempts to manipulate The Mechanic (Barry Nerling), a senior Russian Mobster who Oliver has bamboozled into thinking that they work for the same organization.  Oliver convinces The Mechanic to connect him with the creator of vertigo under the pretense of making a drug deal.

The creator of the drug vertigo is The Count (Seth Gabel).  We get a good look at this guy’s villainy right away when he uses a large dose of his new drug, (which conveniently doubles as an effective instrument of torture), to punish an underling who disappointed him.  That scene is tense and fun, as is another one later in the episode where Diggle (David Ramsey) attempts to talk Oliver, just coming down from his own major overdose of vertigo, into letting him take over the pursuit of the drug dealers while Oliver heals from his unpleasant experience.  When Oliver refuses to quit, Diggle challenges him to a William Tell routine, where Oliver must prove he still has minimal prowess with the bow by shooting a tennis ball out of Diggle’s hand as he holds it only a few inches from his head.  Oliver, still disoriented, doesn’t take the shot for fear of killing Diggle, but then stubbornly decides to pursue The Count anyway without the bow.

And “Vertigo” ends strong, with an intriguing exchange between Oliver and Queen Industries’ problem-solver Felicity Smoak (Emily Bett Rickards), who provides Oliver with some uncomfortable information about his late father’s list of criminals, and points the arrow of suspicion (finally) towards the Queen household.

“Vertigo” features a few major clunkers, though, starting with The Count himself.  Gabel plays this character as maniacally over the top as he can get, reminding you that this is a goofy comic book villain and not an actual big city drug dealer.  Apparently The Count’s R&D phase for vertigo involved experiments on the homeless and prostitutes, which lead to 56 deaths.  This reflects poorly on both The Count’s business acumen and the Starling City police department’s crime-fighting abilities.  If you have to kill 56 people before you start turning a profit in the drug trade, you’re not really a drug dealer, you’re a homicidal maniac, and you might as well save yourself some headache and skip the drug thing altogether.  And while we’re talking about career changes, when Det. Hall does Oliver a favor for old times sake and hands him a slim folder that contains “everything we have on The Count,” (which apparently contains no useful information), it’s clear that the SCPD didn’t exactly shift into high gear when bodies 1 through 56 turned up with the same cause of death.  Maybe those guys are in the wrong business as well?

Also, “Vertigo” features some clumsy transitions, some questionable lines of dialogue, and some product placement for Microsoft that is not exactly subtle.  I’m also having trouble suspending disbelief about the way the Felicity Smoak character has the ability solve any problem Oliver puts to her.  This week she performs “spectroanalysis.”  Last week she hacked an encrypted computer network.  Clearly Queen Industries isn’t paying her enough.

But I can put aside all of these things and just chalk them up to ARROW being a superhero story and not demanding as much grounding in reality as other shows.  But two things really struck me as aggressively lazy this week.

ARROW’s writers stole the Vulcan nerve pinch from STAR TREK this week.  In a scene where Oliver “kills” a Russian Mob flunky in order to prove to The Mechanic that he actually is the hardened criminal he presents himself as, we find out that he apparently just did some neck touch thing that rendered the otherwise unconscious guy “dead” to outside appearances.  We then get a (suddenly not at all unexpected) flashback to the island where Yao Fei (Bryon Mann) introduces this technique to Oliver as a means of helping him fake his death and escape the clutches of Edward Fyres (Sebastian Dunn).  Since this talent really borders on an actual super power, the fact that we’re only seeing it now in episode 12, introduced as an afterthought, means that it was probably just inserted to give the writers an easy way out of scenes like the one with The Mechanic.  But it just seems too fantastical for the world of ARROW, which strives for a certain kind of grittiness it just can’t attain if our hero suddenly can do things that don’t exist in the real world.

Additionally, ARROW got lazy with the staging of its final fight scene this week.  As Detective Lance and several other Officers apparently surround Oliver (in his Hood Costume) and hold him at gunpoint, Oliver holds the limp body of The Count in front of him, both to conceal his identity and shield him from gunfire.  The setup for this scene implies that Oliver is in serious trouble and is going to have to do something amazing, and quickly, to escape this predicament.  But he does the one (un-amazing) thing every one expects him to do – He hurls The Count at Det. Lance and then runs away, which was apparently enough to escape the situation.  It’s not clear if the writers also gave him superhuman speed this week, but however they explain this to themselves, this solution they created is actually more disappointing than the time they gave him the ability to break the zip ties that were holding him to a chair without explanation.

“Vertigo” had some promise, but was plagued by too much cutting of corners, and my hope is that the disappointing aspects of this episode are an anomaly, and not a sign of things to come.