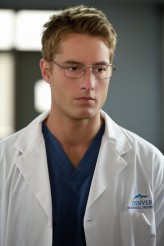 The actor also talks why he didn't go up for ARROW 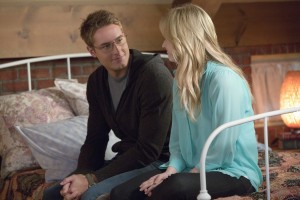 EMILY OWENS, M.D., the hour-long comedy/drama on the CW about a group of surgical interns including the title character played by Mamie Gummer, has its series finale tonight at 9 PM. (Those wishing to watch the entire thirteen-episode run can catch it on Hulu, Amazon and other streaming outlets.)

Justin Hartley plays Dr. Will Collins, Emily’s colleague and crush. The Knoxville, Illinois native had finished playing Oliver Queen, aka Green Arrow, in 2011 on the CW’s SMALLVILLE; previous credits include series regular runs on the gonzo daytime soap PASSIONS and in the police drama GEMINI DIVISION. Hartley says he was happy to dive into playing a doctor, especially on a show that mixes humor and heartache as EMILY OWENS, M.D. does.

AX: Did you do any research into playing a doctor, or did you just jump into the show?

AX: So it wasn’t a case of the CW saying, “We liked you in SMALLVILLE, we’d like you to stay on the network …”

HARTLEY: Oh, I don’t know. I think they liked me from SMALLVILLE. I just think that every show is different, every character is different, and I don’t have mountains of scripts piled on my desk that I’m sifting through, deciding which one to do. I have to fight for things still, so this is one of the ones I wanted.

AX: What did you particularly like about EMILY OWENS, M.D. and the role of Will Collins?

HARTLEY: Well, initially it was, I wanted to do comedy. And that was one of the main things I had in mind. And this show certainly offers that. And secondly, I didn’t want to get away from drama, because I like drama, and this show has plenty of drama as well. And then what happened was, I had that game plan and then I got this script and I just fell in love with the script and the character. I thought, “I want this role.” I tried my best to get it and on a selfish level, though, there is something to be said for playing something different. If you do the same thing over and over again, it’s kind of a trap, so I feel really blessed to be able to play this character, where I can be a little bit funny, a little bit dramatic – it’s not the same character, it’s something that people having seen me in and I’m excited to show them.

AX: Between the time you made the pilot and the time you went into regular production, did you have time to do any research into being a doctor?

HARTLEY: Yeah. I’ve had two physicals since [making the pilot], and one of them was work-related, and the other one was, I just get a physical every year, and I found myself sitting in there asking [the doctors] so many questions. I like to know, “How do you hold a thing? What do you look for when you’re doing this? Where are your hands supposed to be?” I want to look like a doctor, I don’t want to look like a doofus pretending to be a doctor. They have a certain way about them. Cops are the same way. A lot of times, when a cop walks into a room, you can tell it’s a cop, right? Doctors are the same way – they’re all different, but they all have similarities. So I found myself asking a ton of questions of him about his profession, which I never would have done before.

AX: There’s a scene in a pilot which is very, very awkward between your character and Mamie Gummer’s Emily, where she declares her interest in Will and Will has to declare lack of romantic interest …

HARTLEY: Yeah. I’m glad you thought it was awkward. We did our job, then [laughs]. It’s heartbreaking.

AX: Have you ever been in a situation like that in your own life, on either side of it, that you could draw from to play the scene?

AX: Did you go up for the CW’s ARROW series at all?

AX: Is there any difference in doing something more rooted in reality, like EMILY OWENS, M.D., and something based in fantasy, like SMALLVILLE?

HARTLEY: Well, the only difference is dialogue and things you’re talking about. One of the things that we did on SMALLVILLE was, we tried to ground it as much as possible, so for us, it was reality while we were there. I don’t ever remember having a scene, doing the scene thinking, “God, this is so fake.” As an actor, you can’t relate to it if it gets too off your feet. But there’s definitely a difference. You’re not wearing a [superhero] costume – I wear scrubs [in EMILY OWENS]. If you walk into a hospital and saw somebody in scrubs, you wouldn’t stare.

AX: Does that make it a little bit easier for you?

HARTLEY: No, not easier, just different. I enjoy playing different characters. I loved SMALLVILLE. I loved every minute of it. But this show is so well-written and so well-done, and the cast is amazing.

HARTLEY: Thank you. I have a boxing movie I just finished called THE CHALLENGER. I don’t know when it’s coming out, but I play the light heavyweight champion of the world, which is kind of fun. It’s fun to do a physical thing.