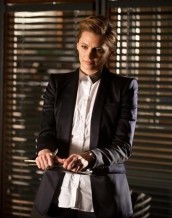 The truly evil Senator Bracken is back, and Beckett's ethics get a real work-out. 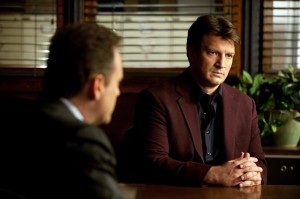 When you think of “Recoil,” especially in the context of a crime-show such as CASTLE, you generally think of a gun recoiling back toward the shooter. But it also means drawing back in disgust from something repugnant, and for Det. Kate Beckett (Stana Katic) and crew, it’s hard to think of a character more repugnant than the man who had Kate’s mother killed, slimy Senator William Bracken (Jack Coleman).

You gotta love Bracken as a bad guy. He’s just pure evil. Beckett may have him by the short hairs, as it were, but he always comes off as if he knows exactly how to play the situation and still come out shining. Coleman must be having the time of his life playing this guy.

When the opening scene is a bum finding a stiff in a burning trash can, you know it’s going to be one of the more tautly dramatic episodes – which is fine. If they were all fun and games, the show would get boring really fast. Plus, because the more dramatic episodes aren’t as dependent on the standard “find the stiff, bring in 12 suspects, arrest the first one you talked to” scenario, there’s room for more genuine plot twists and this one has a couple good ones.

So we’ve got a burned-up corpse, burned well past fingerprint ID, and all the teeth are knocked out. Somebody does not want this stiff identified, which would be a major hang-up in real life, but Medical Examiner Lanie Parish (Tamala Jones) finds a dental screw with a number on it, leading to the ID. The victim is an engineer from New Jersey Melanie Rogers, and guess who she’s been hanging with?

Yep, our friend Bracken, who’s about to make a Very Important Announcement about some environmental legislation that he’s introducing at the local eco-conference. So, gee, someone connected to Bracken turns up dead, what does everyone think? Beckett, in particular, is smelling prey. Ah, but… Thanks to some skillful rendering of the victim’s last phone message (okay, we’re pushing credibility more than a little here, with the sound of the Zippo lighter lid and in the subsequent garage search), they find the car presumably used by the killer. Problem is, the evidence inside means that Bracken isn’t behind the killing – he’s the target.

Given Beckett’s issues with Bracken, in the real world, she should have been off this case before they got back to the station. Inasmuch as we’re not in the real world, Beckett assures Lt. Gates (Penny Johnson Jerald) that she can handle working with Bracken. She even points out to Bracken that she really doesn’t care about him, she’s after Melanie’s killer.

Fortunately, it’s that commitment that keeps her from doing things like suppressing the evidence she finds among Bracken’s hate mail. This after Castle (Nathan Fillion), in a truly sweet moment challenges her about her feelings and then tells her that she’s remarkable. The other good thing about this episode is that Michael Dorn is back as Beckett’s psychologist, Dr. Burke. Not that it appears to help all that much because we’re left at the break with Beckett lighting a match and picking up the incriminating letter in question.

Since we don’t actually see her burn the letter, we have to assume through the commercials that she didn’t actually burn it. Still, she’s a mess, and is about to confess, when the rest of the team saves her by coming up with a name. They go to find him at his apartment, but Beckett finds him alone in the hallway, draws her gun and shoots at him after he dives through a doorway and away. Good cop like Beckett? Yep, she’s feeling totally guilty.

But they bring suspect McManus (Brett Rickaby) in, and find bomb making supplies, then an actual bomb near the hotel where Bracken will be speaking. Oh, and Bracken taunts Kate about shooting at McManus and missing (like, how would he know?) But wait, it’s too early in the episode for things to be this neatly wrapped up. Which isn’t technically why Kate suspects something’s wrong with the McManus bust.

So she does what any other right-thinking cop would do. She calls in the bomb threat right on top of Bracken’s speech. He’s convinced she did it to mess with him. Until Kate hears the sound of a Zippo lighter lid – several yards away on a busy street with a bomb squad doing its thing. Wait, it’s the chauffeur and Kate manages to save Bracken’s backside by mere milliseconds as his limo explodes.

So, now she’s saved Bracken, who with an elegant smirk, points out that he is in her debt and that “You never know when you need a friend.” Do we smell set-up here? But, wait, there’s more! Apparently, the person pulling the strings behind Bracken, money-wise, wanted to kill him because Bracken refused to toe the line, presumably with his big environmental legislation. And, gee, all of a sudden, said kingmaker is connected to the attempt on Bracken and Melanie’s murder.

Kate is perplexed, after all, Bracken is perfectly fine with killing the people who cross him. Ah, Castle is right – having the kingmaker arrested for attacking Bracken, especially since said kingmaker is an anti-environment industrial meanie, makes Bracken look like a folk hero, which will look really good if Bracken is thinking about running, for, say, President? Have to wonder how long they’re going to stretch this story arc out, especially since they’ve done it before, across multiple seasons.