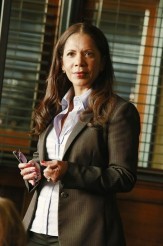 It's all about the romance, the silliness and the parody. The murder? Not so much. 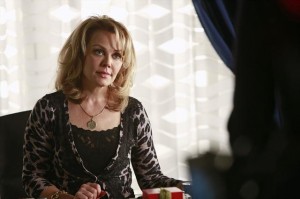 Let’s be real. Nobody, but nobody is watching CASTLE for the clever mysteries (because they frequently aren’t) and the realistic depiction of police work (because it’s anything but realistic). We watch CASTLE for the relationships between the characters and the sheer fun of it when the writers take off on a parody trip. And we’ve got both in “Reality Star Struck.” The only reason the episode didn’t get a higher grade was the improbable leads that kept popping up so conveniently.

So, it’s the first Valentine’s Day of the new romantic relationship, and Beckett (Stana Katic) and Castle (Nathan Fillion) are off to another murder teasing each other about what they’re getting each other for the big day, with Castle threatening to buy Beckett Star Wars toys. Alas, the resident bad girl of reality show The Wives of Wall Street, Hannah (Makinna Ridgway) has been literally stabbed in the back with an ultra-expensive chef’s knife.

Surprise, surprise, pretty much everyone on the show had a reason to hate Hannah, who was getting rather tired of being pushed into playing the bad guy all the time. So there are all these interesting clues, including the knife, itself, which has antimony oxide on the handles, a conveniently time-stamped Facebook photo showing the victim entering one of the other wives’ home, defensive wounds and evidence of being held from 24 hours before and a secret meeting with the host of a companion reality show about businesses getting funding called Shark Pool (yes, eyes are rolling). Oo. Hannah, who supposedly had an affair with one of the husbands on the show, is also leaving it and she’s one of the most popular people.

Like reality programming, the twists and turns get just as ridiculous until all the lies are sorted out and the confession won. Yay.

The fun, though, is that not only is grumpy ol’ Lt. Gates (Penny Johnson Jerald) a total junkie for the show, she gets Castle hooked on it, which is even funnier.I love how those two are always connecting, then hating each other. If Castle weren’t already with Beckett, you’d almost think there was some sexual, will they/won’t they going on.

The other fun plot is that Ryan (Seamus Deaver) is trying to make a baby with his wife, which creates some interesting ins and outs for that character. Because they are at that point where timing is everything, and, well, you know. It’s embarrassing. And while we didn’t get to see much of it, looks like Lanie (Tamala Jones) and Esposito (Jon Huertas) are finally trying to get back together. About flippin’ time, in my opinion.

Then there’s the whole gift plotline, which was fun. Still, you get Castle badgering Beckett to find out what she got him. Gotta love how confident Beckett is that he is really going to like her present. Of course, that puts all the pressure on him to do something really special for her. Typical guy – he gets her earrings. They are gorgeous earrings, but really, is Beckett that kind of woman? At least, Castle doesn’t get her the naughty underwear because that really is a gift for the guy.

Then, Castle goes and tries to be clever about how he gives the gift. Talk about another guy thing. I’ve seen this both in real life and on TV and I do not get it. Guy thinks he’s going to be cute about presenting the present, so he stashes it someplace unexpected, then freaks when the plan goes awry. Like he couldn’t see this one coming? (My husband says it’s the delusion that’s part of being so love that you think what could possibly go wrong?)

So Castle slips the box into what he thinks is Beckett’s jacket, and of course, it isn’t Beckett’s. It’s Gates’, who apparently still hasn’t figured out that there’s something going on between Castle and Beckett. Yeah, right. Nor does she when she finally finds the earrings and reads the note – which doesn’t exactly make sense. On the other hand, how the writers got out of it, with Gates blowing up at Castle for going “too far” was quite funny.

Ah, but Beckett was right – she did have the perfect gift – an empty drawer in her dresser for Castle to put his things in. Just perfect and the perfect reason why I continue to love this show.