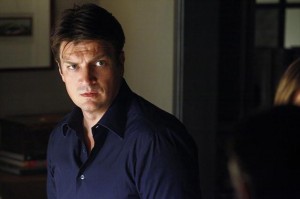 Think of “After the Storm” as the part two of last season’s CASTLE finale “Always,” which you may recall I was decidedly miffed about. And still am.  Yet, despite teases from the network, it does look like we finally have a couple working out their relationship rather than the whole will they/won’t they routine.

And this is one jam-packed episode. I speculated last spring that the planned hit on Det. Kate Beckett (Stana Katic) and her subsequent resignation from the force over investigating her mother’s long-ago death would pretty much set up the story arc for this season. I was wrong. The producers decided to not only wrap up the entire story arc with Kate’s mother in this episode, but even found a way for Kate to make nice with her superior Lt. Gates (Penny Johnson Jerald).

It starts with Rick Castle (Nathan Fillion) waking up in an empty bed, thinking it may have been a dream, but then Kate appears in classic man’s shirt and perfectly tousled hair, bearing two cups of coffee. They’re just about to start in again when Castle’s mom Martha (Susan Sullivan) comes traipsing in and Castle insists that Kate hide in the closet. As he notes later, not his finest moment.

Martha has brought Rick’s daughter Alexis (Molly Quinn) home after her grad night party went too far and Alexis is hung, which works out very well because then Kate’s able to sneak out. Needless to say, she’s a little annoyed, even after Castle confesses he’s not quite ready to let everyone know the happy news. At least until Detective Ryan (Seamus Deaver) shows up at Kate’s apartment. So Kate wants Castle to hide, but he’s dressed so he doesn’t.

Which is just as well because the man that is keeping Kate alive has gotten the snot beaten out of him by bad guy Cole Maddox (Tahmoh Penikett). Ryan’s got the picture of the mystery man that Castle recognizes. Ryan takes off, Kate’s about to bail, but Castle convinces her that together they can figure out who the mystery man is and they start working together again. In the meantime, also disgraced Javier Esposito (Jon Huertas) puts the bite on an army pal of his so that he can find Maddox.

Thanks to a tip Ryan has ferreted out, Castle and Beckett hurry off to the home of one Michael Smith (Geoff Pierson), only to find him badly beaten. As he’s rushed off to the hospital, he whispers “86 mm – ” to Castle. And in a very touching moment, when Kate yells at Castle for grasping at straws, Castle reminds her that he loves her so much that he’ll grasp at any straw he can find to keep her alive. Then, sure enough, he finds the piece of paper with the address that Smith was trying to tell him.

Ah, but, surprise, surprise, Maddox follows Beckett and Castle to the abandoned building, captures them and locks them in a bathroom. The goal is the floor safe in Smith’s old office. Esposito shows up just in time to rescue Beckett and Castle and they go after Maddox, who has opened the safe and is about to pick up the file, when the other three show. It’s a tense moment, because Maddox is not going to go down easily, but he doesn’t count on the safe being rigged with explosives and boom, Maddox is taken care of.

Alas, not the person Maddox is working for, and the file is is itty-bitty pieces. But Ryan, bless his fuzzy heart, has picked up the pieces and brings them to Beckett’s apartment so that they can try to re-assemble it. They get just enough together to pick out a bank account number, which just happens to belong to Senator William H. Braken, who just happened to be District Attorney, when Beckett’s now-dead superior Lt. Roy Montgomery (Reuben Santiago) and some cop buddies were kidnapping gangster’s loved ones and getting ransom money from the bad guys. Hm. Apparently, Braken caught on and wanted in on the take. Only now, he’s being groomed to run for president and that sort of thing doesn’t look good on the campaign trail, especially since Kate’s mother was one of his first victims, way back when.

Smith recovers enough to tell Beckett and Castle they’re on the right track, but he’s soon dead with no trace of a killer. Castle offers to take Kate someplace safe, but, she declares, there is no safe place. So she slips away while Castle is sleeping, and when he wakes up, he calls in Esposito and Ryan to find her before she kills Braken.

Oh, of course, she doesn’t, but her confrontation with Braken is delicious in its brinkmanship. He’s such a slimy a-hole, but the good news is that he doesn’t know that Smith’s file is in a bunch of tiny pieces. Kate throws the bank account number at him and brokers the same deal Braken had with Smith: he leaves her and her friends alone and she keeps the file private.

And, yes, there is that whole making nice thing with Gates, which is rather nice. But it does leave us pretty much back to business as usual, only Castle and Beckett are secretly a couple, and no obvious season story arc. It will be interesting to see what happens next.