The Ten Things We Want to See on CASTLE Season 4 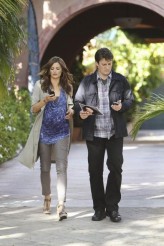 The Ten Things We Want to See on CASTLE Season 4

Okay, there's really only one thing, but we found nine other things that would be fun, too. 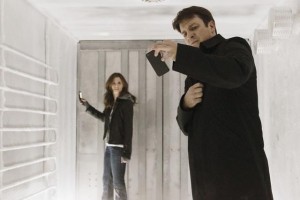 Okay, it’s a gimme that Beckett is going to pull through – kinda hard to continue the series if she didn’t. But there was Castle’s declaration of love as he held her in his arms as she slowly passed out. And that kind of got us here at ASSIGNMENT X wondering what we’ve got coming up this next season.

One thing we’re dead set against seeing is Beckett and Castle going back to the “will they, won’t they” back and forth of pretending that they don’t love each other. We can see Beckett trying to figure out how to accept Castle’s loving her for a little while, but, come on, gang. It’s been three seasons. Enough already. Which leads us to…

1. Castle and Beckett get together. Finally.

It isn’t just about the sex, though we want to see that, too. But these two are, like, best friends and partners and they still drive each other nuts with what they do. There’s Castle’s two failed marriages (or is it three?). Beckett’s issues with intimacy. Both of them are total control freaks. This could be the most fun TV relationship of all time. And, really, when you think about it, is there anything else you’d want to see this season? We didn’t think so.

2. Castle gets the upper hand on Alexis

The show isn’t all Castle and Beckett and the supporting characters and their relationships are a good chunk of what works so well. But every now and then, don’t you just want to slap Castle’s teen-age daughter Alexis (Molly Quinn) and remind her that her dad is a pretty smart man and she should listen to him?

3. Somebody killed with a pen

It is mightier than the sword. In this case, literally. Admittedly, we cringe at all the potential puns that would come out of an episode featuring a pen as a murder weapon. But you gotta admit, it would be different. And macabre. And reasonably interesting, after all, who would use a pen as a murder weapon? Would it be a crime of passion or of cold calculation?

Sadly, this one isn’t going to happen, but, dang, of all the characters to kill off, why Captain Montgomery (Reuben Santiago-Hudson)? Yes, the writers had possibly written themselves into a corner with Montgomery’s connection to Beckett’s mother’s murder, but it just seems so unfair that we have to lose Santiago-Hudson, who is a terrific actor.

5. More of Lanie and Esposito’s relationship

Actually, we have a good solid hint from Tamala Jones, who plays Medical Examiner Lanie Parish, that we are going to see more going on with Lanie and Detective Javier Esposito (Jon Huertas). All to the better because they are such a cute couple and why should Beckett and Castle be the only ones dealing with relationship angst?

6. Castle’s mother backing him up in a fight with Alexis

Martha Rodgers (Susan Sullivan) does function as a remarkable sounding board for her son Castle. But sometimes, just sometimes, we’d love it if she’d back Castle up instead of Alexis. Can you imagine the shocked look on Alexis’ face?

Last season, Detective Kevin Ryan (Seamus Deaver) got engaged. Wouldn’t it be cool to see the wedding? There could be a case involved – a missing bridesmaid or groomsman, a skanky uncle bumped off while the happy couple are off on their honeymoon and they have the key to the killer’s identity. Castle and Beckett trying to work out their relationship at the reception, because it’s not like weddings aren’t fraught with all kinds of emotional baggage.

8. A killer in a bunny suit 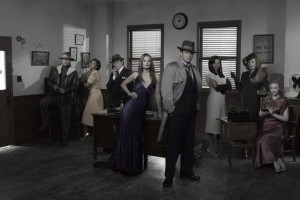 Okay. We’re stretching to come up with ten things, but what a great way to hide your identity. Say the suit was stolen and then the stiff is killed in plain view of witnesses, who all say the rabbit did it.

9. We find out who was behind the murder of Beckett’s mother

Again, stretching a tad, because we are of the opinion that the writers could milk this one for another season, maybe. Or maybe do the big reveal of the bad guy/gal pulling the strings, but then Beckett is frustrated by not being able to bring the person to justice. Nothing worse for a cop than to know whodunnit but not be able to get evidence solid enough to hold up in a trial.

10. A non-formula whodunnit episode or two

The weakest part of almost any Castle episode is the actual murder mystery. The writers are smart to focus on the characters, because that will keep the show lively and interesting. But it’s a little tiny bit sad that you can figure out whodunnit just by eliminating who hasn’t been accused in the first half hour. The mystery part of an episode is pretty formulaic, so it would be nice to see the writers fool us by changing up the formula every so often. After all, the mystery is fun, too.