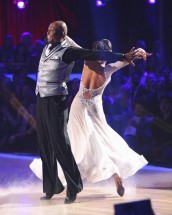 The ChaChaCha and Viennese Waltz are the dances and J.R. Martinez and Chynna Phillips rise to the top

Season 13 of DANCING WITH THE STARS began with some surprises. Most of the couples danced very well together, in particular J.R. Martinez with partner Karina Smirnoff and Chynna Phillips and her partner Tony Dovolani, who both tied for first with 22 points. These people want to win it, badly. The unfortunate part of wanting something so bad is the nerves that go along with it.

Many others let their stage fright get the best of them. Shockingly, David Arquette, who genuinely seems to love the limelight, was off his game. Just watching him, you could tell he was nervous. Yet, he showed a lot of charisma and potential. There is definitely something intriguing about him, as always.

Less mesmerizing were NBA player Ron Artest and Court TV host Nancy Grace. Both seemed uncomfortable throughout their dances, like they just couldn’t wait to get through it. But we all know who most everyone was waiting to see, Chaz Bono, who ironically went last. Through all the seriousness going on around him lately, he finally had a chance to show his playful side. That entertainment blood in his genes showed. Bono put on a show for the audience. However, was it enough? All 12 DWTS duos don’t get another chance like in previous seasons. Tomorrow night someone will go home.

Ron Artest (NBA player) and his partner Peta Murgatroyd
He practically walked through the whole ChaChaCha. Len Goodman agreed, stating the dance lacked content and the footwork was atrocious. Bruno Tonioli gave some credit to Artest, saying he had some power and presence. Carrie Ann Inaba said it was wrong for all the technical reasons.
Inaba – 5, Goodman – 4, Tonioli – 5 Harland – 5

Rob Kardashian (reality star) and his partner Cheryl Burke
He had no glide in his step and although he didn’t walk, he jogged through his Viennese Waltz. Inaba saw that he had potential. Goodman said it was OK. Tonioli begged Kardashian to feel the music.
Inaba – 6, Goodman – 5, Tonioli – 5 Harland – 5

Kristin Cavallari (actress) and her partner Mark Ballas
She’s got something, I’m just not sure what yet. Inaba told her she had a great ballroom body. Goodman thought Cavallari went into her shell during her ChaChaCha. Tonioli said she had the whole package.
Inaba – 7, Goodman – 6, Tonioli – 6 Harland – 6

Chynna Phillips (actress) and her partner Tony Dovolani
She’s extremely graceful and the one to watch this season.
Inaba said she had the talent. Goodman gave a well done to Phillips. Tonioli thought she danced the Viennese Waltz gorgeously.
Inaba – 8, Goodman – 7, Tonioli – 7 Harland – 7

Nancy Grace (TV host) and her partner Tristan Macmanus
It was better than I thought it would be, but only so-so.
Inaba was kind with a you’ve got spunk comment. Goodman was more realistic saying her ChaChaCha was a little underwhelming. Tonioli commented on how Grace didn’t believe she could do it.
Inaba – 5, Goodman – 5, Tonioli – 6, Harland – 5

David Arquette (actor) and his partner Kym Johnson
He was the one I was waiting to watch and he mostly didn’t disappoint. Unfortunately his nerves got the best of him during his Viennese Waltz and he was unable to loosen up.
Inaba really liked it. Goodman said Arquette was a dancer. Tonioli told him to stay with the dance.
Inaba – 6, Goodman – 6, Tonioli – 6, Harland – 6

Elisabetta Canalis (model/TV host) and her partner Val Chmerkovskiy
She is definitely sexy but boy does she need some refinement. Inaba suggested she bring the model out in her dancing of the ChaChaCha. Goodman said he didn’t mind it too much. Tonioli thought she was fine when she was handled by a man.
Inaba – 5, Goodman – 5, Tonioli – 5, Harland – 6

Hope Solo (Soccer Olympian) and her partner Maksim Chemerkovskiy
She has a nice hold and she is by far one of the best dancers of the night. Inaba thought Solo and Chmerkovskiy were connected like glue during their Viennese Waltz. Goodman wanted a little more fluidity. Tonioli thought she attacked the dance nicely.
Inaba – 7, Goodman – 7, Tonioli – 7, Harland – 7

Carson Kressley (fashionista/TV host) and his partner Anna Trebunskaya
He has little hip action and at times he looked spastic but he was fun to watch.
Inaba declared his ChaChaCha her favorite dance of the night. Goodman admitted to being entertained. Tonioli was pleased with all the full-out outrageous fun Kressley offered.
Inaba – 6, Goodman – 5, Tonioli – 6 Harland – 6

Ricki Lake (TV host/actress) and her partner Derek Hough
She is light on her feet. Inaba thought she danced the Viennese Waltz beautifully. Goodman thought she had elegance and overall he liked it. Tonioli was surprised at another great Viennese Waltz.
Inaba – 7, Goodman – 6, Tonioli – 7 Harland – 6

Chaz Bono (activist) and his partner Lacey Schwimmer
He truly gave it his all and he should be very proud of his achievement. Inaba said she was not disappointed. Goodman called him Raz a ma taz Chaz. Tonioli said it was cheeky but cute and cuddly.
Inaba – 6, Goodman – 5, Tonioli – 6, Harland – 6

UPDATE: Click on link for DANCING WITH THE STARS – Week 1 elimination