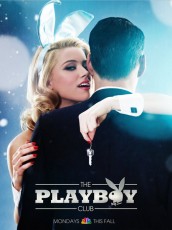 Raise your hands if you know any women today who wished they could have been Playboy Bunnies working at the clubs back in the early Sixties. Come on, don’t be shy … Truthfully, me neither. There are no doubt a lot of men (and some women) who either wish they could have patronized a Playboy Club back in the day or even have fond memories of doing so, but whether their imaginings/recollections match what NBC has in its new series THE PLAYBOY CLUB, but here it is an entirely different matter.

THE PLAYBOY CLUB is set in and around the title establishment in Chicago. Kennedy is in the White House, the Mob runs the town and nobody (in this show, at least) has heard of the concept of equal pay for equal work. As we can see and are frequently reminded, the Bunnies who work the club are not former/present centerfolds, though some of them aspire to this. They are certainly not strippers or prostitutes, but rather high-end waitresses in (for the time) revealing attire.

Maureen (Amber Heard) starts work as a Bunny at the club shortly before former Bunny Carol Lynne (Laura Benanti) is given the job of being Bunny den mother. At first, Maureen thinks that Carol Lynne dislikes her, but it’s also possible that the older woman is looking out for the younger one. Despite her reservations, Maureen also hits it off in a big way with club manager Nick Dalton (Eddie Cibrian). Nick has old Mob ties that come calling, but these may turn out to be helpful when there’s an incident at the club with a wise guy that results in a dead body. Other subplots involve a lesbian Bunny who becomes involved with the Mattachine Society (one of the earliest real-life gay rights organizations) and an African-American Bunny who sees the club as her way to get ahead while circumventing the racism of the day. There’s also an enjoyable period soundtrack, with the occasional performance in the club (the singers essaying Tina Turner and Ike Turner in the pilot have the right high energy to go with their strong vocals).

THE PLAYBOY CLUB isn’t dull, but it’s so busy trying to be all things to all people that it doesn’t have much actual identity of its own. Mindful that the material will be scrutinized for sexism, the series tries to show its female characters as having goals and dreams, but they are still being judged by their looks and ability to seem deferential to men in a way that the male employees of the club are not. The script by Chad Hodge has to bend itself into practically a Moebius strip to accommodate both its own notions of the mentality of the period and some semblance of what contemporary viewers expect, with the likely unintentional result that none of the characters seem very bright.

Benanti commands the screen well as the one female character who does seem to have her eye on a recognizable prize – she may not be talking it up, but we can tell Carol Lynne would like to manage the place – and puts her real-life Broadway chops on admirable display when Carol Lynne sings. Heard does exactly what’s called for in her wising-up-quickly ingénue role and Cibrian has breezy charm. David Krumholtz is entertaining as grumpy, cynical member of the team in charge of the club’s finances.

THE PLAYBOY CLUB isn’t nearly hedonistic enough to satisfy potential viewers who might enjoy something really raunchy, and it’s not original enough to engage fans of period drama. Playboy founder Hugh Hefner himself contributes a voiceover telling us that in the Playboy Club, you can be whoever you want to be. This is obviously and blatantly untrue for the characters – the women better not want to be anything other than hostesses, and the men better not want to be their lovers. It is also untrue for the series itself, which seems to want to be MAD MEN with a lot more sexy women on view, but comes off instead as an eager-to-please piece with more conviction in its production design than in its storytelling.