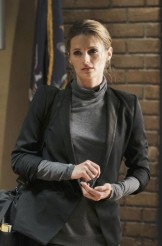 It's back to square one for Beckett and Castle and we are so not happy.

When last we left Richard Castle (Nathan Fillion) and Kate Beckett (Stana Katic) during the Season 3 finale of CASTLE, she’d been shot – presumably by the same cabal behind her mother’s death – with Castle holding her and telling her he loves her.

So, obviously, she survives. We knew that going in – although kudos to writer Andrew Marlowe (who created the series) and director Rob Bowman for granting us just a little suspense on that end. But we figured, Castle is declaring his love. There will be reciprocation, right?

Wrong. Beckett backed off and we are seriously annoyed.

Yes, this is a whodunnit series featuring a different little mystery each week, with some episodes delving into the morass that is behind the murder of Beckett’s mother. Castle, the best-selling author who has an in with the mayor, hangs out with the homicide squad ostensibly to pick up real cop color for his books (now into the third one, Heat Rises, which is available in real world bookstores).

The real charm of the series is the relationship between Richard Castle and his muse, Detective Kate Beckett, whom he has turned into Nikki Heat. The two make this great crime fighting team, but there’s also significant heat between the two and after Castle declared his love at the end of the season three finale, you had to figure this relationship was finally going to get off the ground.

The episode also introduces us to the replacement for the late lamented Capt. Roy Montgomery (the even more lamented Ruben Santiago-Hudson). Capt. Victoria “Iron” Gates (Penny Johnson) is a more by the book kind of cop who is not interested in Castle’s connections, which bodes well for dramatic complication. And there is a nice little mystery revolving around a celebrity murdered in her bed. But there’s also a lot of investigation into the murder of Beckett’s mother, including who shot Beckett, which leads nowhere, so you know this is going to drag out for the entire season.

Fine. That’s worth dragging out, but if Castle and Beckett are not in bed together by the November sweeps, we are really going to be unhappy. Really, really unhappy.