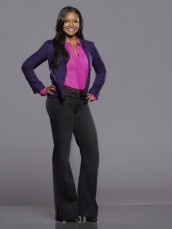 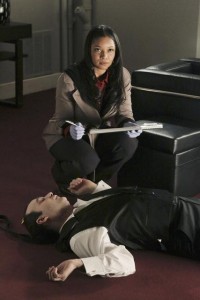 CASTLE has its fourth-season finale tonight, Monday at 10 PM on ABC, but never fear – the Nielsen Top 20 series has been renewed for a fifth season. Created by Andrew W. Marlowe, CASTLE follows the adventures of Nathan Fillion’s character, popular mystery writer Richard Castle, who has teamed up with NYPD homicide detective Kate Beckett (Stana Katic) and helps her solve cases while the two deal with their growing deep personal interest in one another. However, Castle and Beckett wouldn’t get very far in their investigations without knowing how the victims died.

Enter medical examiner Lanie Parish, played by Tamala Jones. According to IMDB, the Pasadena, California native was voted one of the “10 Sexiest Women of the Year” two years running by readers of Black Men Magazine. Jones was a regular on FOR YOUR LOVE and THE TRACY MORGAN SHOW, and has had recurring gigs on series including ER and MY NAME IS EARL, but by next season, CASTLE will be her longest-running gig so far. In person, Jones is charming and enthusiastic as she talks about getting to the guts of CASTLE – literally.

ASSIGNMENT X: Did you imagine when you got the CASTLE gig that it would go for this long?

TAMALA JONES: I honestly had no expectations. When I went up for Lanie, she was only a guest star with a [possibility of] recurring during the pilot, and when the show got picked up, I was granted a blessing – Andrew Marlowe decided to make me a series regular. So I’ve just been filled up with love the entire time I’ve been there.

AX: Throughout fourth season, Lanie has been in an on-again, off-again romance with Jon Huertas’ character, NYPD Detective Javier Esposito. When the idea of that romance was first mentioned to you, what was your reaction?

JONES: I actually loved it, because Jon kept campaigning for this love affair to go down, from first, second, all the way to third season, and Andrew finally decided, “Okay, let’s do it.” So I thought it was cool, because I never thought it was going to happen, because it was coming from Jon – it was all on Twitter –  “Come on, guys, write in, vote, tell Andrew that’s what you want to see.” And it happened. So I was happy for him and I was happy that they actually gave Lanie something else to do outside of being a medical examiner. So that was cool.

AX: And Esposito’s partner Ryan, played by Seamus Dever, has been engaged and finally got married this season. The actress playing Ryan’s wife is named Juliana Dever. Any relation?

JONES: She’s his real-life wife. And she’s such a sweetheart and she executes her character very well.

AX: Obviously, it’s broadcast TV, so there are some things we’re definitely not going to see, but did you have any discussions with the producers about how they show you when Lanie wakes up next to Esposito?

JONES: The only thing they said was, “There might be some partial nudity, so make sure that you have worked out and that you’re in shape if you really care about how you look.” And I do, so I did [laughs]. That was it. They really don’t tell you too much – they’re very secretive. They’re like ninjas on the set of CASTLE. You don’t really hear them or see them coming, but when they’re here, they’re here.

AX: Did you research anything about being a pathologist – cutting oranges open for practice, things like that?

JONES: I didn’t do the cutting part, but I do my research. I watched DR. G: MEDICAL EXAMINER, I watch FORENSIC FILES, I have my medical encyclopedia/dictionary. So I’m always learning about the terminologies and what they mean and how I’m supposed to be describing things, from either that dictionary or – we also have anm.e. who comes down and helps me on the proper things to say and do.

AX: Have you ever been grossed out by anything they asked you to do?

JONES: I did get grossed out – I know it’s just actors and I know it’s just makeup, but there was a guy who was sliced in half. By a katana sword, in half, and to me that was the grossest thing I’ve ever seen on CASTLE. Normally, [the dead bodies are] real [actors] with prosthetic makeup on, but this one was fake. I mean, the organs, the blood, the brain matter – these makeup artists that we have are freaking amazing. And it’s very real-looking.

AX: Did you have to touch any of the very real-looking stuff?

JONES: I think I would have vomited [laughs] if I had to touch it, but I just was taking notes at that point. That’s the most I’ve ever been grossed out to where I was gagging.

AX: Did you have trouble at first with speaking the medical jargon?

JONES: Oh, God. Did I ever. First and second season were the very, very hardest ever. And thank God I have a sweet cast that was willing to sit through that with me. It was so funny, the costar of DANCING WITH THE STARS [Tom Bergeron] was a guest star on the show and he was on the set, he was one of the dead bodies and I had all of this medical jargon to get out, and he happened to be there that day, I got it out right and [the cast and crew] applauded. [laughs] He got up off the slab, he was supposed to be dead, and he was like, “They’re clapping for you!” I was like, “Because I didn’t mess up for the first time!” It was very difficult, and now I’ve got it – I’ve got it down now.

AX: As one of their people has now been on CASTLE, might you ever be on DANCING WITH THE STARS?

AX: Do you have a dance background?

JONES: I do. I used to do jazz, modern jazz, and also ballet and I guess now it’s just straight dancing, because it’s usually at the club [laughs].

AX: Well, when CASTLE is filming, you don’t have a lot of time to do other things.

AX: Last season, Ruben Santiago-Hudson’s character Captain Montgomery was written out, dying to save Beckett. Penny Johnson Jerald has joined the cast in Season Four as Captain Victoria Gates. How did you feel about those changes?

JONES: Mixed emotions. I was sad [about Santiago-Hudson’s departure], because I never, as my character on the show, got an opportunity to really work with Ruben, and I think that he is a genius. I mean, he is an excellent writer, an excellent actor, director and he even helped me with Lanie’s medical jargon, helping me get it down and get it to a rhythm where I was comfortable talking, just asking him, “How do I …?” It was because of him [that the tongue-twisters were conquered]. But at the same time, I’m very happy for him that he’s gone on to do more things. I loved Penny from 24 – I think she’s freaking amazing and she’s awesome. The way that she executes her character, as being a straight by-the-book, very powerful entity, maintaining her feminine side and being able to protect the masculine side as a captain, she balances it so well, you hate her and love her.

AX: Have you noticed any overall changes on CASTLE over the seasons?

JONES: Yes. I think that we’ve all gotten comfortable with our characters and the roles that we play and I think with us being that comfortable, for the writers, it makes it so much easier for them to write even more and go even deeper into our characters, which is what we want, which is what the audience wants. So I think that we’re seasoned now and we know what we do and we just depend on the writers to give us the greatness.

AX: Did you do Comic-Con last summer?

AX: How did you like being a rock star?

JONES: Oh, my God! For two nights, it was awesome! I had a good time. I really did. Really seeing how well [the attendees have] held on to their imaginations as adults is so important to me. Because we lose it. Once we grow up and we get all fancy-schmancy, we don’t play any more. But what’s so great about Comic-Con is, they still are playing. And yes, there are some kids there, but I think those kids are going to grow up and be like the adults and keep that wild imagination and always be fun and always be playful, and I think that’s a major part of being happy in life.

AX: Did you get to meet anybody there that you were excited about?

JONES: I did. I got to meet the entire cast of TRUE BLOOD, one of my favorite shows. I got to meet Peter Dinklage, who plays the Imp on GAME OF THRONES. He is amazing. He is my first little person crush ever. Because he is sexy on GAME OF THRONES [laughs], oh, my God. So when I met him, I was like [shy], “Hi …” [laughs] He was really sweet, though. And just to see the shows that I love to watch and see all the actors there was gift enough for me.

JONES: Yes. I finished an independent movie with Shanola Hampton, who’s on SHAMELESS. She’s amazing. And the project is called THINGS NEVER SAID and it’s about spoken-word, but it’s about so many other things in life and it is a wonderful film and I cannot wait to see the finished product.

JONES: I just love all the viewers and Twitter fans and everybody that has gotten us this far. It is because of the fans and the viewers that we are where we are and I am truly grateful.