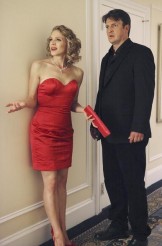 Who cares about the museum heist and stiff? Castle gets Beckett jealous! 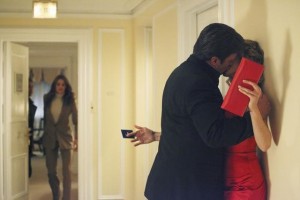 Looks like we’ve got some thawing on the part of Detective Kate Beckett (Stana Katic) – who is ostensibly not in love with author Richard Castle (Nathan Fillion), who works with her to solve crimes. Like heck, she isn’t, and it comes out when Castle gets tangled up with a really hot insurance investigator who horns her way into their latest case.

In this one, a museum director ends up impaled on a sculpture after a very valuable piece of work goes missing. Find the thief, find the killer – or at least, that’s the idea. Except that insurance investigator Serena Kaye (Kristin Lehman) shows up and identifies the electronics used to shut down the museum alarm system as the signature of European art thief Falco. She also makes a point of flaunting her assets in front of Castle, which really gets Beckett’s goat.

STAR TREK: THE NEXT GENERATION star Michael Dorn shows up again as Beckett’s shrink, Dr. Carter Burke. The nice thing about the shrink device is that we’re finally getting a glimpse into Beckett’s thinking when it comes to Castle. So even if she’s not willing to own up to the fact that she’s in love with Castle, we can at least see that she is.

It’s not much, but it’s something to hold onto in the annoying will they, won’t they game the writers insist on playing with us. As for the mystery, it’s not that big a deal. It never is – although this one integrates nicely into the Castle/Beckett back and forth. The mystery is based on being clever and clever will only get you so far. What makes the show is the characters and their journey. So while we still are more than a little frustrated at the reluctance of the writers to go down the relationship path, there are signs of hope and it was nicely done in this episode.