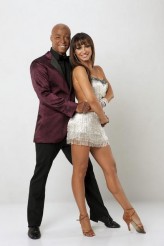 DWTS puts on leg warmers for a flashback to the past

It’s 1980s week on DANCING WITH THE STARS. The challenge was that quite a few of the professional dancers weren’t even out of their diapers in the ’80s. So, their input wasn’t exactly something they could conjure up and flashback to with any hands on ability. Still, some nailed it, others did OK and then, well, there was Carson Kressley. Oh, Kressley it is time to go. Once again he came in last place while Bono stayed status quo matching his scores from last week’s triumphant performance. The Bangles were on hand for some in-house nostalgia for those of us over 35 and they brought the house to their feet. Then, J.R. Martinez brought the house d-o-w-n! Martinez made his way back to number one while consistent first placer Ricki Lake moved to third with her disappointing Foxtrot.

David Arquette and Rob Kardashian are slowly and quietly making their way up the leader board each week. While most of the attention lies on Lake and Martinez, these two are creeping up on them. Hope Solo, yet again, got a solid score of 24, no better, no worse than what she’s got the last two weeks. Then, there’s Nancy Grace, who may have outstayed her welcome. The way she treats her partner, it’s no wonder he hasn’t quit the show yet. It’s not pleasant to see her constantly arguing and questioning him when HE not SHE is the professional dancer. Sorry, had to rant. Let’s move on.

Rob Kardashian (reality star) and his partner Cheryl Burke
He pulled off SEXY! Len Goodman agreed, as did Bruno Tonioli who called him Rob the heartthrob! Carrie Ann Inaba, too, was impressed with his Rumba telling him he was very sturdy on his feet.
Inaba – 9, Goodman – 8, Tonioli – 8, Harland – 8

David Arquette (actor) and his partner Kym Johnson
Very hip and very modern. Surprisingly not too hype for Goodman who thought his Tango was fantastic. Tonioli compared Arquette to Billy Idol. Inaba told him to work on his musicality.
Inaba – 8, Goodman – 9, Tonioli – 8, Harland – 8

Hope Solo (Soccer Olympian) and her partner Maksim Chemerkovskiy
To me she still looks extremely uncomfortable. Goodman thought she showed no strength in her Tango. Tonioli said she was powerful, strong and sexy. Inaba wanted her to not be so rigid.
Inaba – 8, Goodman – 8, Tonioli – 8, Harland – 8

Carson Kressley (fashionista/TV host) and his partner Anna Trebunskaya
What can I say! It was just a bunch of dancing around in a cheerleading costume. Inaba said she saw no technique. Tonioli proclaimed his Jive to be loopier than Loony Tunes. Goodman concurred with a comment suggesting it was time for Kressley to exit the show.
Inaba – 6, Goodman – 6, Tonioli – 7, Harland – 6

J.R. Martinez (U.S. veteran/actor) and his partner Karina Smirnoff
YEA!! He moved it! Boy, can he shake it! Goodman was thrilled, saying way to go! Inaba thought his Samba was muy caliente! And Tonioli said it was perfection.
Inaba – 9, Goodman – 9, Tonioli – 10, Harland – 9

Ricki Lake (TV host/actress) and her partner Derek Hough
Good, not great. Parts of it were slightly weak. Goodman was not pleased, saying it wasn’t her best dance. Tonioli thought their Foxtrot didn’t gel. Inaba was happy to see them work as a team.
Inaba – 8, Goodman – 8, Tonioli – 8, Harland – 8

Chaz Bono (activist) and his partner Lacey Schwimmer
It’s nice to see him approach a dance so enthusiastically. Goodman called his effort gallant. Tonioli said he did very well on his Samba. Inaba said it was the most dancing she had ever seen him do.
Inaba – 7, Goodman – 7, Tonioli – 7, Harland – 7

Who will go home? Kressley or Grace, unless…and this is a big UNLESS…unless their fan bases are so enormous that the show will begin to pick off those stuck in the middle like Solo. Stay tuned.