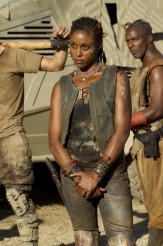 So, hey, when are we getting some dinosaurs in your dinosaur TV show?

TERRA NOVA was billed as a JURASSIC PARK meets LOST with a dash of AVATAR, yet for the most part this show has been dinosaur-free instead focusing on lame storylines involving the Shannon family, troubles teens have with girls (and boys), rebellious moonshine making other teens and a whole host of plotlines that did nothing to promote any mythology or even interesting aspects of what this show has promise to be.

The first CGI dinosaur of “The Runaway” appeared at the 49 minute mark and just hopped up and down a few times. And that was the only beast we saw in “The Runaway”. Really? We’ve been introduced to three dinosaurs in this show – all with clever little names such as Carnos, Nykos and Slashers – yet despite what was billed as an expensive budget for this show, the beasts have been few and far between to say the least.

Again, where’s the dinosaurs in the dinosaur show? Needless to say, another story about a runaway girl that comes into the Terra Nova camp after being with the Sixers wasn’t really as entertaining as it could have been. Or maybe I should just accept that this show is mediocre and when something really cool happens be surprised?

I mean, how many people didn’t peg the little girl as a mole and that she was doing it because she was forced to by the mean, nasty Mira (Christine Adams), leader of the Sixers? That was a turn that’s been done a 100 times in a 100 TV shows.

However, it was not a complete loss, the last five minutes of “The Runaway” with the interaction between Jim Shannon (Jason O’Mara) and Mira was pretty good. We got a whole new bit of info about Taylor (Stephan Lang), his place on Terra Nova and possibly some clues to what the colony really is about.

According to Mira, Taylor has pissed off some very important people back in 2149 and they now want him gone from leading the show in the past. She also said that Terra Nova was never really about starting over. And apparently, Mira and most of the other people in the Sixth Pilgrimage were sent back with the “job” of taking out Taylor and replacing him. Mira also said she is doing it so she can have her daughter come back through the rift in time to join her and if she gets Taylor out of the picture, “they” will do that.

Of course, we don’t know who they are or why they want Taylor out or even what Taylor did to make them want him out. But this is a good start of something. Something that hopefully can make this show better in terms of providing a better overall show and something that will keep us all entertained because right now it ain’t happening.

Jim Shannon logically kept everything he learned from Taylor when he returned because really what is in it for him if he comes clean? Maybe he’d find out the info from Taylor but if he is a former cop a good storyline would be having Jim investigate these allegations by asking around and getting more information.

Things that I thought were interesting or hilarious in “The Runaway”: