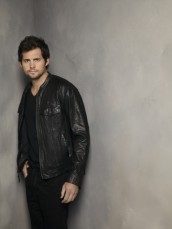 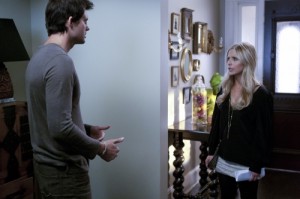 In the CW’s new series RINGER, which airs Tuesdays at 9 PM, Sarah Michelle Gellar stars as twin sisters Bridget Cafferty and Siobhan Martin. Bridget thinks she has problems when the series starts, what with her issues as a recovering narcotics addict, being the star witness in a Federal court case and having a homicidal mob boss after her. Bridget flees to Siobhan’s side in the Hamptons, but it turns out that Siobhan is mixed up in something pretty bad, too. Siobhan fakes suicide, and the terrified Bridget winds up impersonating her identical sibling – and then finds out someone is trying to kill Siobhan as well. Meanwhile, Bridget must keep everyone convinced that she’s really Siobhan, including Siobhan’s confused husband Andrew (Ioan Gruffudd) and Kristoffer Polaha’s character Henry Butler who, Bridget is dismayed to learn, is both Siobhan’s lover and the husband of Siobhan’s best friend.

Although the CW is a comparatively new network, Polaha is already a veteran, having starred as a man surprised to find he’s the father of a teenaged daughter on two seasons of LIFE UNEXPECTED.

“It was a pretty seamless transition, actually,” Polaha says of moving from LIFE to RINGER.“We found out that LIFE was done in November, and I attached myself to CBS [one of the CW’s parent companies] through a holding deal. Then in January, I received a stack of scripts, so it was a pretty quick turnaround. I think I met with Sarah [one of RINGER’s executive producers as well as its star] and Pam [Veasey, another executive producer] in February, and we shot the pilot in March. So it was quick, literally one month of hanging out.”

Polaha has been a regular on NORTH SHORE and VALENTINE and had recurring roles on MAD MEN and TRU CALLING. The Reno, Nevada-born actor is delighted to be working with Gellar, best known for her seven years as the title character in BUFFY THE VAMPIRE SLAYER. “Lots of street cred,” Polaha says of his leading lady. “People, watch out.”

At a CW nighttime party, Polaha gives us a brief exclusive chat about his shady-seeming Henry.

KRISTOFFER POLAHA: We did the pilot [in New York] and now we’re here in L.A. It’s a nice job.

AX: Is RINGER progressing as you expected it would?

AX: What can you say about your character Henry?

POLAHA: I’m the lover. Sarah Michelle Gellar plays two characters, Bridget and Siobhan. Siobhan is married to Andrew, and she’s having an affair with a man named Henry, who I play. Henry is also married to a woman named Gemma [Tara Summers], who is Siobhan’s best friend. So he’s a lowdown son of a bitch doing no-good things. However, within six episodes, there are redeeming qualities that start to show up, and I think the writers are going to sort of move him into a favorable light.

POLAHA: No, actually, she does all these little nuances. The difference between Sarah as Bridget and Sarah as Siobhan, it’s subtle, but there’s a patina that Sarah has when she’s playing Bridget-as-Siobhan, because [Bridget] doesn’t know how to react to people, and so there is something different. Dealing with her when she is Bridget as Siobhan is different from the stuff that we do in flashbacks, when it’s Henry and Siobhan as characters. There’s a warmth and there’s a tenderness there, versus Bridget. So she’s definitely made significant choices to differentiate between the two.

AX: Would you say that Henry also has a kind of a duality to him?

AX: What can you say about him?

POLAHA: I can say that as you watch it, you’ll know what I’m talking about. He’s as devilish as he is charming, and he’s as kind as he is roguish.

Click on Link: Exclusive Photos from THE CW PREMIERE Party presented by Bing!