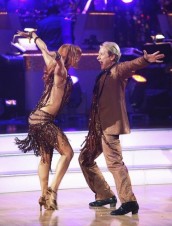 Another one gets the boot on DWTS! 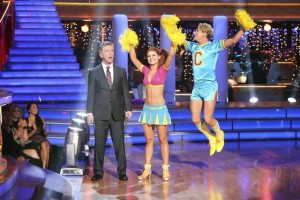 Fans could pull him through no more….Carson Kressley was the fifth contestant voted off DANCING WITH THE STARS: Season 13. It was his time. As fun as it was to watch him on stage and in rehearsals with his partner  Anna Trebunskaya, there was no where else for him to go but home. He had placed last these past two weeks, so it was an obvious choice to send him home. Before Kressley’s graceful exit, we were treated to Len Goodman reprimanding the fans about the voting process, basically telling them “Don’t moan if you don’t phone.” And he’s right. No one can complain that hasn’t voted. If you voted and still your favorite gets the boot, well, then maybe you can gripe a little.

No one was complaining about his or her partners this week, not even Hope Solo. A video segment with the celebs discussing their partnerships with the pros was touching and intriguing. How do they match them up, really? How come there aren’t more hair pulling, lip smacking fights between these duos. Yes, they have their moments. Yes, they have their disagreements. Yes, Maks always makes his partners cry, but never have we seen a full out war take place where blood is shed and pacts are broken. No one ever walks off…except Tony Dovolani when partnered with Kate Gosselin – who wouldn’t – but even he came back. Somehow the producers have mastered their match ups and somehow it all works out.

Also a good match was Kelly Clarkson performing on DWTS. The very first AMERICAN IDOL winner belted out a couple of goodies and then professed how impressed she was with the professional dancers on the show.

A sweet, tender moment came when the A T & T spotlight focused on a young dancer who struggled all her life to make ends meet and who is now a professional who often volunteers her time at her former elementary school.

Despite a disappointing night last night, Ricki Lake was let off the hook and was told she was the first one safe in the competition. After the band Perry performed, J.R. Martinez, too, was in the clear as was Rob Kardashian. David Arquette was left hanging ‘til the end. Chaz Bono got the great news soon after and so did Nancy Grace. Hope & Maks, David & Kym and Carson & Anna were the remaining couples. Arquette was finally relieved of a pending threat of elimination.

Soon, Kressley was told…it was he who was going home. His journey was over. No more excuses for wearing chiffon and lacey blouses in public. Seven are left…we have passed the half way point. Here we go…stay tuned!