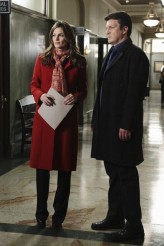 Castle's excited about a courtroom thriller, but it's not a happy one

It’s the big dramatic moment in the courtroom in the CASTLE episode “Law & Murder”.  District Attorney Lou Karnacki (Bruce Davison) is making his closing argument, when one of the jurors starts convulsing, then bursts out of the jury box and collapses.

Meanwhile, Richard Castle (Nathan Fillion) is saying good-bye to his daughter Alexis (Molly Quinn). Only Castle gets the inkling that Alexis is not telling the truth about where she’s going. But homicide detective Kate Beckett (Stana Katic), and he’s off to help her figure out who killed the juror Joe McUsic.

Could it be the defendent’s cousin Wardell (Kwame Patterson)? And why did McUsic buy his way onto the jury? And, gee, why is DA Karnacki so angry about the investigation?

Some of Castle’s dialogue in the early part of the episode is a little on the lame side, but writer Terence Paul Winter redeems himself with some gorgeous scenes between Karnacki and Captain Roy Montgomery (Ruben Santiago-Hudson), Beckett’s boss at the precinct.

And Castle does get into trouble with Alexis when she finds out he’s been tracking her through her phone’s GPS. But it also turns out that Alexis was up to something and she does tell her father about it at the station – another lovely moment.

All in all, while not spectacular, it’s a good solid episode that keeps you wanting more.

Movie Review: YOUR HIGHNESS
TV Review: THE WALKING DEAD - Season 2 - “Nebraska”
BROKEN CITY Highlights this week in Blu-ray and DVD Releases
Dorking Out - Episode 20: The Doctor Strange Is In Edition