DALLAS takes leaps in time in "Trial and Error" 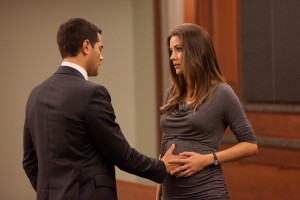 The fifth episode of DALLAS, season 2, plays out with not much going on, at least for a drama like DALLAS, anyway. Expectations are high with this fast-paced, high-octane show, but this week’s installment lacks the gusto from previous weeks. C’mon guys kick it up a notch before the audience goes south. Ala THE OUTSIDERS – Do it for Larry! In a quick turn around Ann (Brenda Strong) demands that Harris Ryland (Mitch Pileggi) tell the authorities that she is the one who shot him. Never mind the blood on her boots does the trick and within a month she is on trial for attempted murder.

Wow! Does it ever happen that fast? Anyway, somewhere prior to the speedy trial Cliff (Ken Kercheval) taunts J.R. about John Ross (Josh Henderson) tattling to him which results in J.R. seething in anger. The weird part is we don’t get to see the much anticipated confrontation between John Ross and J.R. because, fast forward a month and we are at the trial with the whole gang there. All we see is J.R. and John Ross stare at each other before Sue Ellen (Linda Grey) comes over to tell her ex to get over it, he’s your son – forgive him!

Big holes are left open, not only as to how John Ross found out J.R. knew of his back stabbing but what happened with Pamela (Julia Gonzalo) and John Ross during the last month? And one minute John Ross is having Elena’s (Jordana Brewster) brother Drew (Kuno Becker) followed and the next … it’s a month later? Huh? A huge time lapse sadly flattens this episode and we are left wondering, what’d I miss? What happened, not only with the characters but to our beloved show? Could this time jump have to do with Hagman’s real-life death which messed with the actual plans for this storyline on the show?

Ann is convicted of attempted murder, very quickly, they waste no time in Texas and a very, very bad guy…hint hint….is somehow about to be let out of or escape prison.

Let’s hope next week’s show is back on track filling in those big gaping holes this week’s episode left. Cuz this week’s DALLAS ain’t cutting it.