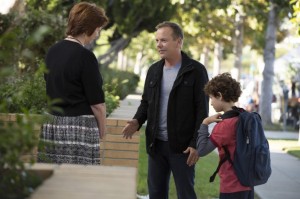 On TOUCH, now in its second season on Fox, Fridays at 9 PM, Kiefer Sutherland plays Martin Bohm, a single father since his wife died in the 9/11 attacks. Martin’s now eleven-year-old son Jake (David Mazouz) doesn’t speak, but he has the ability to foresee intricately connected events before they even happen. The first season was set in New York, but now Martin and Jake are in Los Angeles, where they’ve met Lucy Robbins, played by Maria Bello, whose missing daughter Amelia has abilities similar to those of Jake.

Tim Kring, who created and executive produces TOUCH (his previous credits include creating HEROES and CROSSING JORDAN), takes some time at a party thrown by Fox for its talent, creative personnel and the press to talk about what’s new this year – and what may be up with his Web series DAYBREAK (available at Daybreak2012.com), which overlaps with TOUCH.

AX: Now that Martin and Jake are on the run, are they more liable to run into the people in the “thread” stories we’ve been seeing?

TIM KRING: Well, they’re actually not so much on the run, they’re actually out here in Los Angeles. They are connected with [Lucy Robbins], who’s trying to find her daughter. Jake is also looking for [Lucy’s] daughter Amelia, and so that’s what the second season of the show is about, the finding of Amelia, the same way that the first season was about the child custody issue that Jake was facing. He got taken into this board and care facility in the pilot, and at the end of the season, Martin grabs his son and runs. So in some ways, the arc of the season was all about that and the introduction of the mystery that started to creep in from about six episodes in, the serialized nature of the show started, so that by the end of the season, those last two episodes were pretty serialized. So we’re picking up with that energy at the beginning [of Season 2].

AX: Is the reason they landed in L.A. as opposed to, say, Chicago or Boston, because that’s just easier in terms of production?

KRING: Because that’s where we make the show [laughs].

AX: Do you have to dress L.A. up as Baghdad?

KRING: Yes, exactly. And yet, in some ways, ironically,New York was harder to do than Baghdad for us [laughs]. It’s harder to hide palm trees and create taxis and make sidewalks look bigger and all those things that everybody knows about New York. It’s just harder to do here [in Los Angeles]. It’s the strangest thing how some things, like Baghdad, not so hard to do.New York, really hard to do. [laughs] We’re in a desert and we have sets we can go to that give you a sense of a look [of the Middle East]. Whereas New York is very difficult, unless you can get onto the Universal back lot or something that has a big set. But we were not able to do that.

AX: What’s going on with DAYBREAK?

KRING: Well, DAYBREAK has launched, but it has a much longer tail, I guess, than television. It’s not time-sensitive, so it can be found. So we literally just launched on Machinima, we’re talking about different distribution platforms. So it has a different kind of a life. It can be found by somebody and watched all in one fell swoop.

AX: Is DAYBREAK’s life as a pilot is still unknown?

KRING: Yes, still unknown. And listen, it wasn’t created as a pilot – that would’ve been a wonderful byproduct of it – but there also could still very much be a DAYBREAK 2 that corresponds, that connects up with the second season of TOUCH in the same way that we lead into a second version of that

AX: Are actors from DAYBREAK liable to be folded into TOUCH this season?

KRING: Well, I sure loved a lot of the cast, I really did, and I thought it was actually a really terrific cast. Ryan Eggold and Sarah Roemer. And having people like James Kyson Lee be in the show, Eugene Byrd, people that I’d worked with before, was really great. So yeah, that absolutely could happen.

KRING: To be really honest, I don’t know that it has that same energy, but I think a lot of people have not found TOUCH. My sense is that a lot of people haven’t found it, and in this day and age, when you can find content in so many different platforms, we’re hoping that the second season then feeds into people wanting to watch the first season, finding it online or finding it on DVD. I haven’t really followed chat rooms and that sort of thing, but just anecdotally, I think people were very satisfied by the arc of the first season. We certainly were [satisfied] creatively. I felt very good about the season.

AX: Do you think viewers have a different type of interest in TOUCH than HEROES? Are you tracking that aspect of the audience reaction?

KRING: Well, I don’t know that it was ever intended to have the same fan base. It certainly is not that Comic-Con crowd. It was not designed to be that. To be really honest, I did not think about what kind of person [would watch TOUCH] – I wrote it because I wanted to write the story and it was something I wanted to say and a message that I wanted to put into the world and I did not think a lot about the specific kind of fan that I was going after. I don’t know that you can aim at that and achieve that very easily.

I wrote it on spec and wrote it completely without thinking what the result was going to be, I just wanted to write this story. So it has a kind of purity in that way. But the thing is that I’ve always had somewhat of a broad sensibility. I’ve learned to trust that what I like other people will like, I guess. After twenty-seven years of writing in Hollywood, I’ve learned that my taste is somewhat general.

AX: In doing second season, are you thinking at all about where you might go in third season yet?

KRING: No. Right now, we’re really focusing on this one arc of the story, about finding Amelia. The show is going to have a much stronger serialized engine this season than the first season, which gives us a certain license. It adds kind of an adrenaline to the show and I think it will generate a little more fan interest because of the serialized nature this year.

AX: Are we going to be seeing more serialization in the subplot stories?

KRING: Well, there are a couple of big stories, and so yes, there will be those satellite stories that exist on their own occasionally, but the truth is, the show is really geared much more toward being serialized.

AX: And what would you most like everybody to know about TOUCH at this moment?

KRING: One, that we’re excited and thrilled to be coming back, that hopefully everything that people loved about the show, they’ll have this season, but they’ll also have the added adrenaline of a very big central story, a la the season finale. So if you liked the season finale, the engine of the show is going to feel very much like that.