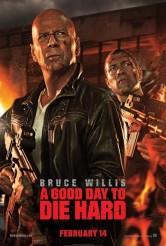 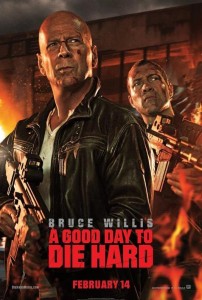 The good and bad thing about A GOOD DAY TO DIE HARD is that one doesn’t have to be familiar with the other four DIE HARD movies (for those keeping track, the original was released in 1988) to hit the ground running here. On the one hand, it cuts down on pesky exposition (kept to a minimum despite the espionage storyline); on the other hand, it decreases any nostalgia we might have about the past of our hero John McClane (Bruce Willis).

What we do know of McClane suggests that he’s been a loving father, so it’s a little hard to swallow that he’s quite so estranged from his adult son Jack (Jai Courtney). When McClane learns that Jack has gotten arrested in Moscow and may be looking at a life sentence in a Russian prison, his paternal instincts kick in and he heads to the courthouse – just in time for the crap, tear gas, grenades, rocket launchers, cars, flipping trucks, helicopters and everything else, nailed down or not, to hit the fan.

There is a plot, with at least one decent twist, that takes the two McClanes all over Moscow(especially its freeway system) and out to Chernobyl. There is also the flinty fun of the well-matched Willis and Courtney giving each other grief and tough love as father and son inevitably bond via peril, adventure and gunfire. However, no one is going to argue with the statement that A GOOD DAY TO DIE HARD has its heart in its explosions and particularly some extraordinary vehicular crashes. Director John Moore and writer Skip Woods have concocted a protracted chase sequence that keeps building in size and volume until we actually slip into the demolition zone – for a time, the whole art and craft of filmmaking seems to exist so that we can explore every possible way to spin, flip, crunch and otherwise wreck cars, trucks and armored personnel carriers. This part of the film is in its way awesome – it literally inspires a kind of awe at the thoroughness of its destructive power.

In fact, this is not the only big set piece in the movie. Very few conversations simply end without being interrupted by gunshots, explosions and/or something crashing into a building. Characters keep saying things like “Times have changed” and “It isn’t 1986,” but as far as the action ethos goes, there’s more bang for the buck, with just enough characterization to justify our sympathies for the McClanes.

Director Moore and his production team are persuasive (at least to the casual observer) job of making the Hungarian locations look Russian and Woods peppers the dialogue amusingly with reflexive “strong” language, possibly in order to ensure the film’s R-rating street cred and probably because this is how we’re used to McClane talking, 2007’s PG-13 LIVE FREE OR DIE HARD notwithstanding.

For people who are fans of the DIE HARD films and/or Willis’ action persona, or those somehow unfamiliar with either but fond of the genre, A GOOD DAY TO DIE HARD will be a good time at the movies. For those who are familiar but still not fans, this won’t change any minds.