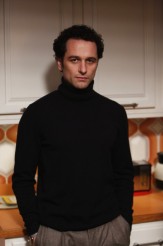 The Welsh actor talks playing a Russian spy undercover in the U.S. 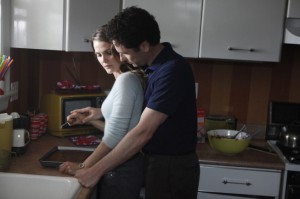 In THE AMERICANS, the new series created by Joseph Weisberg, FX Wednesday nights at 10 PM, it’s 1981 and the Cold War is raging at full strength. Phillip and Elizabeth Jennings, played respectively by Matthew Rhys and Keri Russell, are the perfect all-American couple with a loving marriage and two children. Except … Phillip and Elizabeth are actually deep-cover Russian spies, whose marriage was arranged for them when they were still back in training in the old country.Elizabeth is still devoutly loyal to the cause, while Phillip is tempted to defect – except he’s fallen in love with his wife and doesn’t want to risk breaking up their family.

Rhys, originally from Cardiff, Wales, spent five years playing Kevin Walker on ABC’s BROTHERS & SISTERS. He was also a regular on the British series BACKUP and appeared opposite Anthony Hopkins and Jessica Lange in the feature film TITUS. At a party thrown for Fox, FX and the Television Critics Association, Rhys speaks up to be heard over the crowd noise to discuss his new espionage TV gig.

AX: In real life, you have a U.K. accent, but here you’re playing a Russian pretending to be American. Is it difficult doing what the American accent of a Russian would be like?

MATTHEW RHYS: No. You see, now my job is incredibly easier, because what I find is, if anyone has a problem with my American accent, I can just blame it on the fact that I’m Russian. I have a foolproof alibi now.

AX: In the opening episode, Phillip is very ambivalent about his loyalties. Will that increase as the series proceeds?

RHYS: Yes. I mean, I thought it was a great plot point that they did, which was to sort of show the bomb under the table from the get-go and then let it tick. So it’s this beautiful elephant in the room that acts as [a story engine while adding] enormous tension to their relationship that’s already present. Because of the new feelings he’s now developing about [Elizabeth], it’s not a clean-cut process. He can’t draw a hard line and say, “This is what I’m going to do,” because he has these real emotions for her. So it’s a real ping-pong game.

AX: How is it playing opposite Keri Russell and playing this arranged marriage that’s become a romantic marriage?

RHYS: That was one of the greater draws for me of the project, that it was this arranged marriage that, yes, does turn into something deeper, but adding to that, they both have conflicts, which makes for a relationship drama as well as a spy thriller.

AX: How is it playing a parent?

RHYS: Nightmarish. They don’t shut up. [laughs] No, we’re very lucky with the actors [Holly Taylor and Keidrich Sellati] we have playing our kids.

AX: In a lot of shots, that’s clearly you and not a stunt double. Is it hard doing all of the physical stuff you have in terms of Phillip’s fights?

RHYS: It is, yeah, yeah. But I love it. It’s like being ten years old in your garden again.

AX: Did you have to do a lot of preparation to either not break your hand or break the other guy’s neck?

RHYS: We do a fair amount of martial arts training, which is a great way of getting fit without being on a hamster wheel.

AX: As far as the love scenes – they’re not graphic, but they are very intimate –

AX: Is that fun, is that unnerving …?

RHYS: I think that always depends on the person you’re doing it with. It’s just a change to be doing it with a member of the opposite sex [Rhys’ BROTHERS & SISTERS character is gay].

AX: THE AMERICANS starts just when Ronald Reagan is coming into his first term as President. How much will that factor into the story?

RHYS: Funnily enough, we just shot an episode that was based entirely on the assassination attempt on Reagan. I love that we have at our disposal to use the issue and play around with [historical events] as and when we want.

AX: You’ve done series both here and in the U.K. …

RHYS: I was lucky – I did BROTHERS & SISTERS for five years [before doing THE AMERICANS], so I’ve been through that process of learning how the Americans do it.

AX: Is THE AMERICANS done any differently than BROTHERS & SISTERS was?

AX: You have to cover a lot more ground?

RHYS: We do. An action sequence as opposed to opening a bottle of wine, it’s a little different.

AX: What would you most like people to know about THE AMERICANS?

RHYS: Well, I think I can say this for once in my life, hand on heart and with all sincerity, that it really does hold something for everyone.