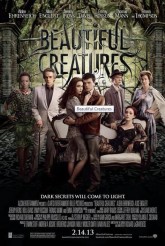 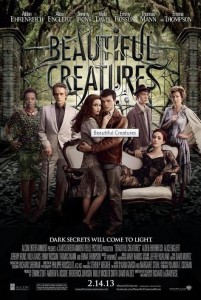 Like its heroine Lena Duchannes (Alice Englert), BEAUTIFUL CREATURES fights hard to retain control of its soul. On the one hand, screenwriter/director Richard LaGravanese’s adaptation of the novel (the first in a series) by Kami Garcia & Margaret Stohl has wit, charm and a pair of appealing young leads with Englert and Alden Ehrenreich as her mortal boyfriend Ethan. On the other hand, this is YA supernatural romance with the genre conventions that entails, so good adults wring their hands and are largely there for local color, and evil adults aren’t nearly as terrifying as they ought to be. The film is striving for a sense that anything can happen, while simultaneously sporting telltale markers that certain things definitely won’t occur and others absolutely will.

Ethan is entering his junior year of high school in the small town of Gatlin,South Carolina. Ethan can’t wait to escape the place until he meets Lena. For one thing, Ethan has been inexplicably dreaming about Lenafor months. For another, it turns out that Lenais a “Caster” – i.e., a born magic user – who will manifest either Light or Dark on her sixteenth birthday. Lenais worried that her inner nature will turn out to be Dark, her Caster relatives are all sure she’s going to be the most powerful Caster so far, there’s a family curse and there’s also a magical law stating that love between Casters and mortals is forbidden.( “Mortal” in this sense seems to simply mean non-Caster, as the Casters don’t appear to be immortal.) Ethan is so in love with Lena that he defies her protective Uncle Mason (Jeremy Irons) and Lena’s own fears, but what can any of them do against the curse?

LaGravenese and the actors do a great deal to make us like Lena and Ethan, and the cast has a lot of lively folks like Irons, Emma Thompson, Emmy Rossum, Margo Martindale, Eileen Atkins and Pruitt Taylor Vince to make us sit up and take notice. Viola Davis does a heroic job with an enormous amount of exposition.

BEAUTIFUL CREATURES also looks very Southern Gothic, with the occasional foray into the borders of Wonderland on the occasions when Lena’s kin come together with their diverse fashion styles. The special effects are mostly good, though there are some shots where the actors are clearly not one with their backgrounds.

The problem is partly tone and partly text. Without having read the book, it’s impossible to say how constrained LaGravenese was by the source material, but in the film version, we’re given no reason to seriously suppose that sweet, thoughtful Lena is going to surprise us all when she turns sixteen. This has something to do with the curse, but – as opposed to the clearly explained light/dark choice – it’s not entirely clear what this does to Lena. It doesn’t prevent her from being with Ethan, as we’re told that’s a separate issue. It doesn’t doom her to darkness, because that’s her fate if she’s not strong enough to choose for herself, her choice if she’s as powerful as others believe. So what does the curse do? Apart from providing a big story engine for the third act, it’s not clear, and for something that affects this many characters, it should be crystal.

BEAUTIFUL CREATURES also has a spiritual side, which will strike some viewers as affecting and others as cheap insurance to draw in audiences who would otherwise eschew a film that shows magic as even a sometimes good thing.

It’s not hard to see the parallels to TWILIGHT, but BEAUTIFUL is its own creature. It’s uneven, but overall diverting.