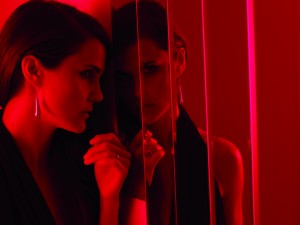 FX’s THE AMERICANS  has its first-season finale tonight, May 1 at 10 PM, but the series was already renewed for a second season by the time its second episode aired. The story begins in the early Eighties, at the beginning of Ronald Reagan’s presidency. Philip and Elizabeth Jennings, played respectively by Matthew Rhys and Keri Russell, have been married almost fifteen years, have two kids and seem to be a thoroughly conventional suburban couple. They are in fact KGB spies for what was then theSoviet Union.Elizabeth is a true believer; Philip is having doubts. More urgently, although the marriage was arranged by their KGB handlers, Philip and Elizabeth are actually starting to fall in love with one another.

For most people, working on a hit television series is the most exciting and challenging job they’ll ever have. Joe Weisberg, creator and one of the executive producers on THE AMERICANS, says this is the case, but he was in fact a CIA agent from 1990-1994. He says the inspiration for the show came from the real-life incident a few years ago, when a group of Russian sleeper agents were uncovered living apparently ordinary lives, though it made more sense to set the story when the Cold War was at its height.

ASSIGNMENT X: You had a really interesting-sounding job. Is Hollywood actually more appealing than the CIA?

JOE WEISBERG: I have to say, I like it a lot better. And another funny thing is, the hours are a lot worse [laughs].

AX: Why did you leave the CIA?

WEISBERG: I wasn’t there very long. It’s such a bureaucracy. You say you want to leave, and they call you into an office and there’s a ton of paperwork and they call you into a little cubicle. I knew one person who, when they left, somebody said, “If you stay, we’ll bump you up a pay grade,” because that person spoke two foreign languages fluently, including a very hard-to-learn language, so the bureaucracy churned and said, “We should make an extra effort to keep this person.” [laughs] Everybody else, they have no problem with you leaving. You go into a room, they push your secrecy agreement back and read you your secrecy agreement, and it turns out if you didn’t notice the first time, there’s an extra line at the bottom of your secrecy agreement for you to sign your name again for when you leave so they can remind you of everything you promised not to talk about, but it’s all like a churning bureaucratic movie.

AX: You were in the CIA, but the primary U.S. government agency we see in THE AMERICANS is the FBI. Why is that?

WEISBERG: Well, Philip and Elizabeth are foreign spies working on American soil, and it’s the FBI counter-intelligence unit that’s responsible for tracking, chasing, fighting that threat within the continental United States. So they were juts the appropriate agency to battle against Philip and Elizabeth. The CIA does have some roles that it plays within the continental United States; specifically, they try to recruit foreigners that are here on visas or studying or things like that, so that when they go back to their countries, the CIA can run them abroad. But it’s just the FBI was the right agency.

AX: Is your fellow executive producer Joel Fields your writing partner on THE AMERICANS?

WEISBERG: Well, we’re co-show-running together, and we’re writing episodes together and we’re sort of doing the whole thing as partners.

AX: Now, did you guys know each other before, or is this a KGB/FX-arranged marriage?

WEISBERG: [laughs] Yes, this is an arranged marriage and it’s working out well.

AX: Can you talk about casting Keri Russell and Matthew Rys as your leads?

WEISBERG: It’s funny. Looking back on it, it seems like it happened easily and naturally. Gavin O’Connor, who directed the pilot, was a big voice in the casting and I think he’s known as somebody with a great gift for that and a great intuitive sense. Same for the people at FX who obviously had a lot of experience and know how to cast shows. It all just came together very naturally. And when we first saw the two of them together, we just knew right away that it was right. I feel sort of funny saying that, because that must be what everybody says, but it does feel like that’s that couple, right?

Until we started casting this, I hadn’t seen Matthew in BROTHERS AND SISTERS. I had seen Keri over the years. I hadn’t seen WAITRESS and I saw it, and I was like, “Whoa.” She could do anything. And I saw MISSION: IMPOSSIBLE III. But you know what was funny – I saw MISSION: IMPOSSIBLE, and it was like, “Okay, she can kick people and do amazing action stuff,” but after WAITRESS, it was like [sighs], “Oh, she’s so moving and powerful.” It seemed like she could just becomeElizabeth so quickly. And then the cool thing, too, was how the characters start to shake themselves around the actors in wonderful ways.

AX: There’s a scene in the pilot where the Russian general says, “The Americans have elected a madman!” Is this a show in any way for Americans who didn’t necessarily feel Ronald Reagan was a good president?

WEISBERG: Well, I think it’s got a special interest for them. I didn’t plan it for them, but it was one of the groups that I thought it was going to be interesting for them. The specific context for that speech was that, after the Soviet Union fell, a lot of stuff came out about how the Soviet leadership thought and felt about Ronald Reagan. And until the Soviet Union fell, there was nothing [known about the thinking of the Russian leadership], just speculation. It’s not that the Iron Curtain was quite as rigid, it’s not that nothing came out, but how the people at the Politburo thought and felt and talked, there was nothing. So what started coming out was, they thought he was crazy. They thought he was mentally unstable. So for him to [say about Russia], “This is the evil empire!” and to talk in that way, they thought this was a crazy man with his finger on the button, and they were terrified. I don’t know if he was literally crazy, but he was very openly committed to their destruction. I think some people feel that [Reagan was a great president] and some people think he was crazy. I’m always surprised by how little middle ground there is. That interests me.

AX: Will Philip and/or Elizabeth get involved in American politics, as volunteers or something like that?

WEISBERG: One thing I think would be really fun – I just have this storyline in my head that I want Elizabeth, when the time comes, to find herself almost working on Geraldine Ferraro’s vice-presidential campaign, which means she has to be a Democrat.

AX: Prior to creating THE AMERICANS, had you thought about the Eighties at all as a period you were interested in, or did you just feel, “This is when we need to set this story”?

WEISBERG: I hadn’t thought about it at all. In fact, I originally started thinking about the Seventies, but then it was like they had to be [in the same era as] Ronald Reagan. The funny thing is, the Eighties – the music and culture and clothes seem so rich, and everybody seems to have the perception that the Eighties was kind of a drag in all those ways.

AX: The Eighties saw the rise of today’s capitalism, so since you have main characters who are critiquing that …

WEISBERG: Yes. Thematically, it’s perfect for us in every way. It’s the perfect time frame for us. If the show keeps going, it will just end the show in time for the ending of the Cold War.

AX: Did the success of HOMELAND in any way pave the ground for THE AMERICANS?

WEISBERG: I don’t know. We were developing this before HOMELAND was around, so I don’t know if it’s helping us or not. I watch HOMELAND. I love it. A number of people in the media have said to me that HOMELAND has made the public very receptive to espionage dramas, so enough people have said that to me that I’m starting to think, “Yes.”

AX: Is there anything else you’d like to say about THE AMERICANS right now?

WEISBERG: The thing we didn’t talk about that much is, it’s supposed to be a show about a marriage, more than anything else, and what I really hope is that people will really connect to that relationship and find things in it that they relate to. As this married couple goes through the crazy things that they do, and they do some crazy, crazy things, they’re still dealing with the same things any married couple deal with as they do them.