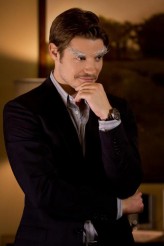 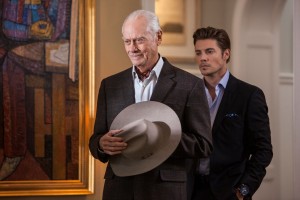 Josh Henderson couldn’t be more perfectly cast as John Ross Ewing in the TNT DALLAS reboot. Born and raised in Dallas, 31-one-year-old Henderson has the drawl and swagger to make J.R. Jr. come to life; the fans and critics alike love what he is doing with the part. Last summer, the pressure was on to revamp DALLAS, a worldwide favorite television show and Henderson knew all too well what he was getting into. “Bringing a show back that was so well loved originally can be a little nerve wracking,” admits Henderson. ” All of our main goals was that the fans of the original were satisfied with how the show is 20 years later.”

The DALLAS cast and crew succeeded in creating the same ambiance and seduction that catapulted the original series into legendary TV status. The show has been well received and now as the second season begins Henderson feels grateful yet somber continuing on without his TV dad Larry Hagman who passed away after filming just 7 episodes of the second season. Henderson is mirrored by what John Ross is going through on screen in a way. Through the passing of Hagman, Henderson lost a paternal figure in his life.

“I’m so fortunate to have this role and to have been able to kind of watch Larry in the role of J.R. And the fact that now he is gone, I can hopefully kind of have J.R.’s spirit living through me. I’m going to be my father’s son and no one is going to stop me, ” says Henderson in regards to his character John Ross. ”

Hagman also taught Henderson how to enjoy his role and that it would come through on screen. “He said if I can tell you only one thing about being a Ewing, you know John Ross, or someone like his father,” recalls Henderson,” is that everything he does he has fun with it. Larry had fun with everything he did.”

Henderson says the whole cast felt a huge responsibility last season to not disappoint the fans and although, with the success of the show, some of that weight is lifted he says everyone who is part of the show takes their jobs very seriously, knowing how important it is. However, Hagman’s absence from the show halfway through the season is something concerning not only the producers of the show but fans alike. Henderson and the cast realize what an intricate part of the show Hagman was and always will be.

“J.R. was a magical character,” says Henderson. “I think that he was a huge reason why the world was really captivated by DALLAS originally and we were so blessed to have him back in this new DALLAS.  {His death} was very surprising to all of us.”

As much as DALLAS meant to the fans, DALLAS, too, meant the world to Hagman says Henderson. “DALLAS was a huge part of his life. He really loved us and loved the show and loved being a part of it. I was just so fortunate to be able to work with this amazing man. It’s going to be tough but we’re going to keep on trucking.”

His character John Ross will keep thriving as well but, Henderson reveals, he will go into a darker place because of the loss of his father. However, John Ross is set to take from his father what he has already learned and continue to grow in unexpected ways. “I think he’s going to feel very, very lost and unprepared with J.R.’s early exit. It’s painful for him and it’s going to cause some unbelievable emotions and actions and stuff to come out of John Ross.”

The last six months has brought on monumental changes in Henderson’s life. “Fans of the show are very passionate, especially the fans of the original,” says Henderson who spends time online with Twitter and Facebook chatting up his fans. “It kind of puts you in more of a like intimate place with these people that you have never met because they’re so attached and there is such a nostalgic aspect to DALLAS for them.”

Henderson says most of the feedback is good, Either the fans love him or they love to hate him in the role of John Ross. Still, Henderson says he is no John Ross and in fact in real life he is kinda laid back. “I kind of put everyone else before myself,” explains Henderson. “That’s how I was raised and that’s who I have always been. But being able to step out of that and play a character that is so conniving and scheming and willing to do whatever it takes to get what he wants is something I’ve grown to have fun with.”

That’s just what his TV dad taught him. “He said if the actors are having fun and just kind of personable and enjoying work every day that trickles through to the crew, to the writers, to the directors, everyone on set and it makes it an enjoyable work environment,” says Henderson.

Not only does this attitude help atmospherically on the set but Hagman believed that this too affects the performances and the depth of those creations.

“That’s what he told me season one,” says Henderson. ” ‘As JR. Ewing I just have a blast whether I’m blackmailing someone or whether I’m destroying a man’s life.’ It’s like he just did it with a smile on his face and he enjoyed it and that always bled through.”

Henderson hopes to carry on the legend of his famous television father through his portrayal of John Ross. I take that as a big responsibility playing his son,” says Henderson. “And now that he is gone hopefully I can really kind of exude that spirit of Larry and J.R. through my character John Ross and keep it living.”

“At the end of the day whether it’s this season, season three or down the road however far we go, I’m always going to hear J.R. ‘s voice in the back of my head telling me I’m doing it right or I’m doing it wrong or ‘I’m proud of you’ or you know, ‘fix this.’ So I’m really going to never let him go. And it was a blessing for me to be able to have learned from a man like that.”

However, most importantly to Henderson is that the show continues to be something Hagman would be proud to be a part of. “At the end of the day we want to make sure that they respect Larry and that hopefully the fans will really accept the way that Larry exits and that’s a really big deal for us,” reveals a very protective Henderson who feels strongly about carrying on the DALLAS legacy in honor of Hagman. “We’re going to continue on because I know that’s what he would have wanted.”