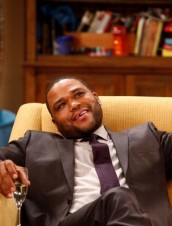 The actor talks playing a dad, plus the end of LAW & ORDER 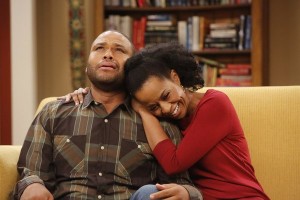 On NBC’s half-hour comedy GUYS WITH KIDS, Wednesdays at 8:30 PM, Anthony Anderson plays Gary, a stay-at-home father who tends to the family brood while his wife Marny (Tempestt Bledsoe) works for the family income.Gary spends a fair amount of time hanging out with his baby, while in the company of fellow dads Chris (Jesse Bradford) and Nick (Zach Cregger) and their own offspring.

Born and raised in Los Angeles, Anderson is no stranger to comedy, having created and starred in the series ALL ABOUT THE ANDERSONS, playing a fictionalized version of himself. Among many other comedy credits, he has a fairly jocular role in the original TRANSFORMERS. However, he’s also done a lot of drama on the big and small screens, including roles in THE DEPARTED, THE SHIELD, K-VILLE, TREME and the last fifty episodes of the original LAW & ORDER as Detective Kevin Bernard.

At a party thrown by NBC for the Television Critics Association,Anderson talks about his return to the half-hour format and playing, per the series title, a guy with kids.

AX: Were you specifically looking to do a comedy after LAW & ORDER ended?

ANDERSON: I was. I was actually in development with FX for something for myself, and Jimmy Fallon had called me up and said he had this great project, and would I want to be a part of it? And I read it and said, “Yes.” I was looking to get back into half-hour comedy.

AX: Has half-hour comedy changed much since the last time you did it?

ANDERSON: No, it hasn’t. With the exception of BERNIE MAC, all of the situation comedies I’ve been a part of were multi-camera, so it’s a welcome return to it. I wanted to do a multi-camera show. It’s kind of nostalgic to go back to the birth of what all of this has become. So it hasn’t changed for me at all.

AX: Was NBC actively looking to work with you after the end of LAW & ORDER, or was you doing another NBC series sort of a coincidence?

AX: Were you sorry when LAW & ORDER came to an end, or were you ready for a change?

ANDERSON: No. I’d only been there for two-and-a-half years, and I wasn’t ready for it to come to an end. I was a part of history with LAW & ORDER. Being a part of a show that was on the air for twenty years, tied GUNSMOKE for the longest-running one-hour [primetime] drama in TV history. We would’ve loved to have broken that record, but we tied. It was unexpected. But that’s what happens in our industry and we move on.

AX: How do you think you’d feel about being a stay-at-home dad like your character if you weren’t an actor?

ANDERSON: I wouldn’t mind. Doing this show and reading up on stay-at-home dads and just men with children has given me a greater appreciation, one, for what my wife did, for putting her career on hold – she worked for NBC for ten years and decided to stay home and be a homemaker – and you look across the country, and there are more men who are doing this job. And a lot of them are catching a lot of flack, because people say, “How could you allow your woman to go out and work while you sit at home with your kids?” And sometimes this is a thankless job and there’s no job more important than raising your children.

AX: How is it sharing the screen about equally between your character’s life as part of a married couple, a father and a friend to two other guys with kids?

ANDERSON: It’s great. They’ve assembled a great cast, and Tempestt Bledsoe, Jamie-Lynn Sigler, Jesse Bradford and Zach Cregger. We have just as much fun off-camera as we do on-camera and I think that’s what really sells the show. I think that people are attracted to that and can see that. We’re really enjoying one another, and it’s not something that’s just scripted on the page.

AX: And do you feel you’re doing a different type of comedy with, say, Tempestt Bledsoe than Jesse Bradford and Zach Cregger than the baby?

ANDERSON: Well, comedy is comedy. It may be different in the way you approach it dealing with children and then working with the [adult] actors. It’s like a great tennis match – you volley, you put that ball in play and you just go back and forth. With the children, it’s a bit unpredictable, and they’re in the driver’s seats. Children and animals, sometimes you’re at their mercy. And a lot of the magic comes from the unpredictability of these infants that we’re working with. We’re having a ball with them. It’s keeping us all on our toes.

ANDERSON: I have a show on the Golf Channel, which is now a part of ABC Family because of the merger with Comcast. It’s called GOLF IN AMERICA. I’ve been doing that for three seasons now. I’m a judge on IRON CHEF AMERICA on the Food Network. I have two films in the can. One [now out on DVD] did pretty well at Sundance called GOATS – me, David Duchovny, Vera Farmiga and Minnie Driver. And my [GUYS WITH KIDS] Jesse Bradford and I have a film that we did two summers ago called THE POWER OF FEW with Christopher Walken and Christian Slater.

AX: Anything else we should know about GUYS WITH KIDS?

ANDERSON: No, that’s about it. Everything you should know you’ll see Wednesday nights at 8:30.