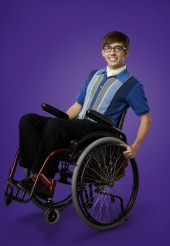 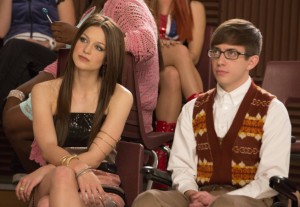 GLEE, the series created by Ryan Murphy, Ian Brennan and Brad Falchuk about a small-town high school glee club with big dreams, is now in its fourth season on Fox, Thursdays at 9 PM. Some of the main characters graduated last year; the series follows them in their new adventures while continuing to follow events at McKinley High, where new students have joined the glee club.

Kevin McHale plays Artie Abrams, who has been on GLEE from the beginning. This year, Artie is a senior. Artie is in a wheelchair, though Texas-born McHale is not only able-bodied but admired by his fellow GLEE actors for his skills as a dancer.

At a GLEE set visit arranged by Fox for the Television Critics Association, McHale takes some time to talk about where Artie and GLEE have been and how he feels about where they are now.

ASSIGNMENT X: With some characters graduating, there are some actors who are still on the show but you don’t have as many scenes with, and there has been an influx of new actors this year …

KEVIN McHALE: Jenna [Ushkowitz] and I had maybe a mini-breakdown [over the departure of the graduated characters] at some point. I feel like it would have been easy for all of [the new cast members] to come on the show and be intimidated, because coming into a group that is so tight – because we’re so talented [laughs] – but it went from us kind of feeling like older brothers and sisters [to them] to us even learning from them. And it would have been so nice to be like, “No, they’re all rude and untalented,” but unfortunately, it’s quite the opposite [laughs].

I can’t imagine the show without them now and [am impressed by] how quickly they’ve kind of become GLEE. And I love the whole transition between New York and McKinley. I know we all wondered [how that split would work] over the summer. And when we got the first script, we were all so excited. Like, “Oh, it works so nice.” 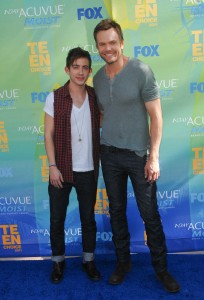 AX: Artie is paraplegic and you spend the great majority of your scenes in a wheelchair. Do you ever have to jump out of the chair and run around for a little bit because your legs are cramping up, or do you feel an obligation to stay seated?

McHALE: No, I get up in between each take, I do. It depends on the day. Some days, I will just happily sit in there and be very thankful that I have a very comfy chair that nobody else has, but I don’t cramp up or anything.

AX: Do you like the fantasy sequences where Artie gets up out of the chair and dances, or do you feel like too much of that would compromise the character?

McHALE: I like them – we’ve only had three in four seasons, and I think when they do it, it’s appropriate and it’s not forced, like they’re not just trying to fit in a dream sequence. I think it’s always been at a really great moment that it’s telling a story, and for me, that makes it so much easier, because I do feel like there’s some responsibility to play that character as realistic as possible, and I think how they write it, it’s always been so easy to trust in them. They do it great every single time.

In the beginning, there was some [negative reaction] that came out about hiring somebody who was able-bodied, but I was happy – I still am happy to play Artie and just get the part. I don’t have any control over that. I think the big thing was, for all the negative flack I got, I got a hundred times more positive comments. It’s not about me, it’s about how my character is being represented on TV in such a positive way. I was happy to take on that – I love playing Artie.

AX: Are fans surprised when they see you walking in real life?

McHALE: I don’t know. There are some people who kind of freak out, like “Oh, my God, I had no idea.” But I think it’s great to represent the people who need to be represented and need to be seen, because you can probably name on one hand people in a wheelchair on primetime television.

AX: Some of your GLEE colleagues have aspirations to direct, as does your character Artie. Do you want to direct in real life?

McHALE: [laughs] I don’t, and there are so many people in this cast who do. For me, I think we probably all could direct after being around it this much – I mean, we’re on [the fourth season] and I probably could maybe do it, but I don’t really have the passion or interest to do that right now.

AX: Does doing GLEE and the live tours give you a desire to do Broadway?

McHALE: I have never done theatre – I’m the complete opposite of most of the other people here [laughs] and theatre kind of scares the crap out of me. I probably will eventually want to do it, just to push myself and get over it, but it seems so scary, just like this is so much harder.

AX: As GLEE has young fans and the show is now in its fourth year, even though you’re fairly young yourself, you’re part of a series that some of your fans have been watching for most of their conscious lives …

McHALE: [doing an old man accent] I remember when we started GLEE. We were just kids … [normal voice] It is really strange, I have to say. I feel like even in the first season, when people started to really latch onto the show, I would have friends [who would] be like, “Do you realize what you’re a part of?” And when you’re in it, I don’t think you can really grasp it. I know amongst each other, we would be like, “This is crazy.” We’d go to places and see all these kids reacting to it. But now, four years later, hearing [new cast members] who are on the show [makes air quotes] “growing up with it” – it’s an amazing feeling, because I know how that feels, watching something and what it means to me when I can connect with something on TV, having watched it through childhood. It’s weird to be a part of something like that. It’s very surreal. I can’t really wrap my head around it.

AX: Is there something you’d particularly like to say about GLEE right now?

McHALE: I think the coolest thing is actually, even with new kids coming on and who have watched the show, growing up seeing Michael Jackson and how, “I can’t be that, I can’t do that,” seeing these characters that hopefully represent a lot of people, that you can eventually do whatever you want to do. As corny and cheesy as that can sound, I think that’s been the message since Day One and we’ve all felt like a real glee club, because we came from out of nowhere, and we’re fortunate enough to be on a show that’s successful, so we have definitely compared our own lives to the characters on the show.