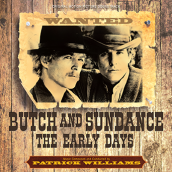 Raindrops keep falling with the luck of the outlaw Irish

Those expecting this prequel score to repeat the 60s pop Latin swing of Burt Bacharach will be in for a delightfully rude Irish awakening when listening to the BUTCH AND SUNDANCE: THE EARLY DAYS soundtrack. It’s an iconoclastic gem of ’70s western scoring, courtesy of the unsung Patrick Willliams, whom Kritzerland last paid tribute to with heir release of CUBA. Not only does BUTCH  impress with its pennywhistle, harmonica and spoon percussion, but even more so by using a forlorn tuba, chirpy flutes and a harpsichord to give CASSIDY more the feel of a comedy about mismatched band mates in Victorian England as opposed to an Old West buddy desperado film.

Yet that kind of absurdist tone is right on target with director Richard Lester’s approach in showing two legends’ somewhat bumbling beginnings. But Williams is also able to get serious with rousing Big Country orchestral swells, ornery brass and feverish strings. Satire and straight musical shooting rousingly team up for a “The Really Big Tran Robbery,” a heist where Butch and Sundance show their outlaw star quality with locomotive-like rhythms, sweeping Irish charm and cartoon pratfalls, all making for a dazzlingly fun showpiece of musical ingenuity. One of the truly fun and surprising retro releases of the year so far, Kritzerland’s EARLY DAYS also offers even more Gaelic flavor with slapping spoon and mouth harp as it complements the original score with the movie’s “original” score, creating an album full of charmed Irish raindrops falling on one’s ears.

Clink on the link to buy the BUTCH AND SUNDANCE: THE EARLY DAYS soundtrack