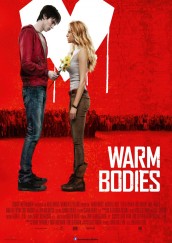 Sweet and often amusing, but could use stronger mythology

WARM BODIES takes some of the conventions of the vampire romance genre and applies them to the zombie genre with a gentle sense of humor and a metaphor that sort of works but could have used a little more oomph.

It’s been about eight years since a plague swept through the world, turning most people into flesh-eating zombies and forcing the survivors to hole up in walled cities. The zombies, meanwhile, wander around slowly as zombies do when there’s nothing for them to eat. One zombie, R (Nicholas Hoult), has actual thoughts. He can’t remember much about himself, but he has enough reflection and motor skills to know that he likes LPs of classic pop and rock music (making for a fun soundtrack).

R is part of a larger group of zombies shambling through an abandoned airport. On the same day they decide they’re hungry, a group of young soldiers from the nearby walled city are sent to raid an abandoned pharmacy for drugs. The two factions converge, with some results that are typical – zombies eat people, people shoot zombies – and some that aren’t. Regarding the latter, R sees and is immediately attracted to Julie (Teresa Palmer), who happens to be the daughter of the city’s commander, General Grigio (John Malkovich). R then kills and eats the brain of Perry (Dave Franco), which gives R Perry’s emotions and memories. It turns out that Perry was Julie’s boyfriend, so R is now smitten. He protects Julie from the other zombies by convincing her to pretend she’s one of them (which also saves Julie’s surviving companions by drawing the zombies away).

R stashes Julie in an abandoned airplane. He learns to talk again and she learns to trust him. There may be even be a way for R to help bring change to his fellow zombies – that is, the ones who haven’t given up and become skeletal “bonies” – but can the humans be convinced to hold their gunfire long enough to see that there may be light at the end of the tunnel?

Taken on its surface – and some will argue that this is what we’re supposed to do anyway – WARM BODIES has good humor and a reasonable amount of charm. Director Jonathan Levine, who adapted the screenplay from Isaac Marion’s novel, has a gentle touch, so that much of the time, this feels like another cinematic tale of male adolescent romantic longing in a tradition that spans everything from SAY ANYTHING to SCOTT PILGRIM VS. THE WORLD to MTV’s TEEN WOLF. R is our narrator, and we immediately like him for his observations that he should stand straighter – which is a problem, given his condition. Hoult brings soulfulness and empathy to R, and he has good chemistry with Palmer’s Julie. For those who may be slow to observe that the names R and Julie, when paired, evoke Romeo and Juliet, there’s even a balcony scene to underscore the point.

There are also a number of good jokes here. In order to preserve both the PG-13 rating and the tilt toward romance rather than horror, none of the zombies look particularly distressing. They’re pale and have dark circles around their eyes, but nobody is missing chunks of flesh or even displaying bite marks (R is an outright hottie who just needs a little time in the sun). Blood is present but not plentiful. In other words, zombie movie aficionados can bring friends who may have been too squeamish for SHAUN OF THE DEAD but are amenable to VAMPIRE DIARIES.

However, the WARM BODIES filmmakers are so entirely caught up in zombies as a metaphor for depression (including the possibility of depression ultimately ending) that there are places when they seem to forget the fact that there are unusual elements to the story of R’s evolution. In a conventional zombie movie, it’s not necessary to know how the epidemic started. However, when your story is about a potential cure for the zombie condition – i.e., bringing the reanimated corpses back to full life – then exactly what the condition is becomes highly relevant. There are some signs that not providing exposition on the topic is meant to be part of the humor, but the omission never sends up anything specifically nor provides laughs in its contrast to other zombie films – it just seems like nobody wanted to go to the trouble of thinking through the mythology. There are also inconsistencies, like the fact that the corpses move very slowly – except when they can suddenly speed up, jump and handle tools in combat sequences. At another point, characters get hold of a functioning motor vehicle, but it doesn’t occur to them in a timely fashion to use it to get to a desired destination. All of this makes us aware that we’re watching something that’s pleasant and is making a point, rather than immersing us in a world where we experience comedy and wonder.

As for scares, there is one “jump” in the film. Otherwise, we like the characters enough to worry about them, but we’re not scared and we don’t have a great sense of dread.

WARM BODIES is warm and often entertaining, but not only is it seldom gross, its desire for quick emotional effects prevents it from being truly engrossing.