Home » do no harm review 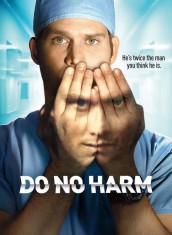 ©2013 NBC/Matthias Clamer
Steven Pasquale in DO NO HARM
Reviews 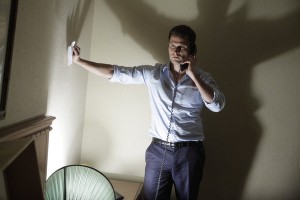 Steven Pasquale in DO NO HARM | ©2013 NBC/Patrick Harbron

Four and a half years after the schizophrenic spy drama MY OWN WORST ENEMY came and went, NBC is trying another split personality story with DO NO HARM. This one is closer to DR. JEKYLL AND MR. HYDE (considered the wellspring of the genre), as the good side, Jason Cole (Steven Pasquale), really is a doctor and the bad side, Ian Price (also Pasquale), isn’t simply an alternate persona, but one who is dedicated to debauchery.

Given the amount of mythological track that has to be laid out in the first episode, it may be unfair to judge DO NO HARM’s potency by this first look. We learn that Dr. Jason Cole is a neurosurgeon who is concealing his dissociative identity disorder from colleagues and friends, except for trusted researcher buddy Ruben (Lin-Manuel Miranda) and a twelve-step group leader (John Carroll Lynch). Jason’s problem is so extreme that he is himself at exactly 8:25 in the morning, and at exactly 8:25 every night, he becomes the destructive, Dionysian Ian Price – or at least he would if he wasn’t drugging himself into insensibility via a concoction whipped up in Ruben’s lab. Trouble is, the drug is failing and Ian is emerging. Despite Jason’s best efforts to get himself out into the middle of nowhere for the night, Ian easily outsmarts him. In fact, Ian almost gets to perform surgery – but it turns out that this is a trap Jason has set to get Ian put into a medical deep sleep. If it’s true that surgeons need to have their blood levels checked before operating, this is a smart twist that bodes well for future episodes. By the end, Jason has decided to lull Ian into a false sense of security by declaring a truce, so that Jason can in fact figure out how to rid himself of his alter ego once and for all. Meanwhile, what Ian finds out that Jason doesn’t yet know is that they have a little boy with ex-lover Olivia Flynn (Ruta Gedmintas).

That this is all farfetched isn’t the problem, since series creator David Schulner and the adept cast, which also includes Alana De La Garza as a fellow doctor with an attraction to Jason and Phylicia Rashad as their boss, know how to play it straight without descending into rigidity. The dialogue has snap and Jason and Ian’s workarounds for each other are becomingly clever.

The trouble seems to be – and here’s where it may be unfair to judge by Episode One alone – that Ian so far isn’t a terrifying figure. He’s more like Charlie Harper on a bender on TWO AND A HALF MEN than like Charles Manson. Certainly it would be an incredible inconvenience to have him around one’s real life, but in the pilot, Ian simply has orgies, smokes and drinks. Groundwork is laid for him to attempt to perform surgery without knowing what he’s doing, and this may yet happen, and he’s stalking his ex, but so far, this is more soap opera (and potential sitcom) than thriller.

DO NO HARM also has a straight procedural element, with two E.R.-style medical subplots that are both cleverly constructed to include Jason and Ian. It’s interesting from a script-structure standpoint, as we’ve seen these sorts of scenes before, but never for this kind of dual purpose.

In its first episode, DO NO HARM lives up to its title. We can’t yet see where it’s going, but on its own terms, the pilot is diverting though not gripping viewing.