The executive producer talks about his collaborations with Ryan Murphy 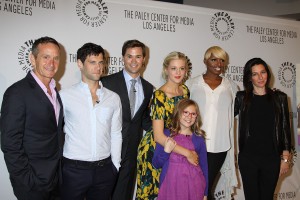 Dante Di Loreto is president of Ryan Murphy Productions. This means that Di Loreto, working with Murphy, had four shows on the air this past season: GLEE, just renewed for two more seasons, currently in its fourth season on Fox Thursday nights at 8, the second season of the reality series THE GLEE PROJECT on Oxygen, the second season of the already-renewed AMERICAN HORROR STORY on FX (all of these with Brad Falchuk as fellow executive producer) and the freshman half-hour comedy THE NEW NORMAL on NBC.

During a visit to the GLEE school set on the Paramount lot, Di Loreto (pronounced de-lo-RETT-oh) steps out of the classroom into the hallway to talk about his busy year in television.

ASSIGNMENT X: How does the collaboration work with you and Ryan Murphy, and sometimes Brad Falchuk? Does Ryan Murphy say, “I’ve had a brainstorm,” and you say, “Okay, this is how we’ll implement it,” or do you sometimes say, “I like this brainstorm, that one’s more of a sandstorm …”?

DANTE DI LORETO: I’m lucky enough to work with one of the most creative, inspired and driven people in television, so I think that we were fortunate to be supported by people who support his creative vision, both at the studio and the different networks we work with, so when he is really excited about a particular idea, it’s infectious. You can’t say no. None of us can, and you want to do everything you can to make it happen. And you know, we’re selective – it’s not like we’re trying to produce as much television as possible, but I think of it like a star. There are all of these different points, and each one can be very different than another. 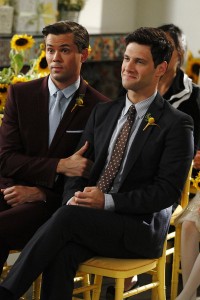 AX: In Season 4 of GLEE, you followed some of the graduated seniors to New York while continuing to follow the action at McKinley High. More characters will have graduated by the beginning of Season 5. How many different places can you take your graduating seniors – Chicago, Los Angeles – before it becomes logistically impossible?

DI LORETO: I’d never want to limit anyone’s imagination that way. I think that the show has showed that there are a lot of ways to tell a variety of stories – we have yet to prove everything that we can do with the show and I would look forward to a Season 5 and a Season 6 to show those.

AX: Is one of the things that you enjoy about GLEE getting to do a lot of different things, like the storylines that take place in different cities?

DI LORETO: Oh, my God. Imagine – every day you come to work, you’ve never done it before. It’s something new, it’s something exciting, whether it’s a type of musical number, or a type of location, or a storyline – it’s always new and that makes it thrilling, it makes it incredibly challenging, and endlessly fun.

AX: In what we’ve seen so far, do you have a favorite episode or a favorite song?

DI LORETO: There is no way I could say that. Sometimes I love the really simple episodes that might be four or five songs and some intimate stories, but then we’ve had some epic moments that are so emotional. I love episodes with great heart and great emotion, they’re some of my favorites, but also we can do wicked comedy better than most, and that’s a lot of fun.

AX: Doing THE NEW NORMAL, have you found that producing a half-hour show is easier or harder than producing an hour?

DI LORETO: Easier, because you laugh more. And it’s over five days. It’s much easier. It tends by design to be more contained, there aren’t as many production elements, so you can really focus on the performance, and it’s a smaller group of people. So it was delightful to have two or three people in a room, saying really witty lines and just laughing. That was a very easy and joyful experience, the pilot was.

AX: Ryan Murphy and his husband have dealt with having a child via a surrogate mother in real life; THE NEW NORMAL is about two men, played by Justin Bartha and Andrew Rannells, who contract with a woman played by Georgia King to carry a child for them. How is it when the creator’s real life is sort of dovetailing into the storyline?

DI LORETO: It’s only great inspiration. Really. That’s the key to it. Every writer is always looking for inspiration. And we all pull from our own experiences when we’re writing, and that’s what [Murphy] is doing.

AX: Has NBC had any broadcast standards notes?

DI LORETO: They’ve been incredibly supportive and it’s a comedy. There’s nothing we’re trying to do with the show that’s trying to find [the limits] of decency. It’s a family show and we want it to be a family show. I think everybody is going to find themselves or somebody they know in that cast. It’s ultimately really accessible to a wide range of families.

AX: This is one of the few shows on network TV that has as main characters not only a male couple, but a sexy male couple …

DI LORETO: I think it’s an evolution. I think that how gay characters have been portrayed on television has evolved over time, as every character does, and I think it’s just a natural consequence that of course you would want them to be attractive. They are a couple that you would want as your next-door neighbors. It was important to us that you believe the relationship. I think that it has to be honest and believable for us for the comedy to work and be believable. That’s all we’re attempting to do. And by the way, the two best actors got the job. They happen to be two good-looking guys and have a wonderful chemistry together. [Georgia King is also] a wonderful actress.

AX: Has there been any particularly challenging aspect of making THE NEW NORMAL?

DE LORETO: No. The challenging aspect is [not] laughing [during takes].

AX: On GLEE, what was the hardest thing to accomplish, maybe that surprised you in how hard it was?

DI LORETO: Shooting in New York, that first scene seemed like a monumental task and then became incredibly fun. And then when we do specialty groups, it’s always a unique experience, whether it’s a geriatric choir or a deaf choir or doing a wheelchair ballet – it’s always something you’ve got to figure out, and sometimes you don’t know how you’re going to pull it off until you’re actually filming it, and that can be nerve-wracking. Some of our biggest episodes, Sectionals, Nationals, when we have a lot of moving pieces, those are epic and require a lot of planning.

AX: What have you learned in the making of GLEE that’s been most moving or exciting to you, that you didn’t know before you were making it?

DI LORETO: I learned about the audience. I learned that people want to feel good about, and they want to see, talented people doing what they do – singing, dancing, acting. Really, it’s kind of renewed my faith in the diversity of the audience’s appetite for entertainment.