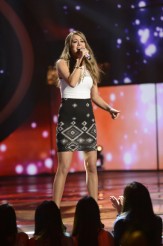 Kree Harrison and Candice Glover left to fight for winner 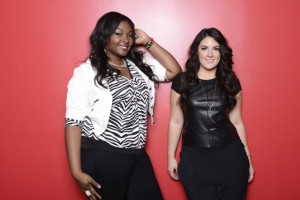 After this week, it will be the finale of the world’s greatest karaoke competition, AMERICAN IDOL, and after numerous changes announced recently, it will be a decidedly different show next year.

But who went home? By now you know that unfortunately Angie Miller was voted off leaving Candice Glover and Kree Harrison to battle it out for the title.

It was a bit of a shock seeing as how Angie was penned as a possible winner of it all but with only three left at the time, how much of a shock really was it? Angie was good but Candice is better and that tough country crowd – that seems to every year come out in force for IDOL – continues to carry on the tradition of bringing a country singer (Harrison) to the finals.

Does this mean that maybe the only ones left watching IDOL this year are country fans? Certainly not as it would be Janelle Arthur and Harrison in the finals if that was the case and not Glover – who no doubt should be the winner. However, things usually are not as concrete as who the best performer is on this show and we will see what happens next week.

Meanwhile, we found out that Randy Jackson won’t be on the show next year and the likelihood of every other judge being there is also remote – especially with lame Mariah Carey and weird Nicki Minaj.

So, who do you think deserves to win it all this year?