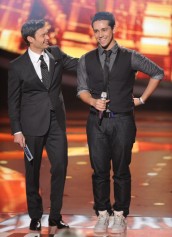 Only a few surprises as to who made the Top 10 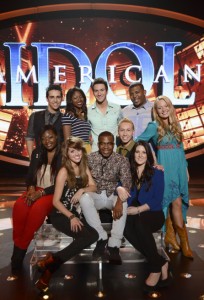 It was decision time on the world’s greatest karaoke competition, AMERICAN IDOL, as the Top 10 performers are chosen by America and the finals begin next week.

In case you missed this week’s performances, I recapped the women and men. I loved the Seacrest opened the show trying to prove how “dynamic” this season was because they had more votes than they did last season at this point. Of course, this is out there because IDOL is doing terrible in the raings, OK not terrible but at their lowest point in 10 seasons with things such as MODERN FAMILY and BIG BANG THEORY beating the show.

Luckily, they actually allowed the winners to perform after they were announced meaning we didn’t get a lot of fluff other than three recaps (which was too much). They also had the judges and audience in suspense as Seacrest walked the finalists in front of everyone, which was a kinda cool twist I guess.

Seacrest revealed the dudes first with Paul Jolly getting the first reveal, which is already a shocker given he wasn’t very good last night. Second was Burnell Taylor, which is good because he rocked it. Third was Curtis Finch Jr., and it would have been a shocker if he didn’t make it given how much the judges love him. Fourth among the dudes was Devin Velez, arguably the best of the men during their performances. Fifth and finally was Lazaro Arbos. I was right of 4 out of 5 with my picks with the only shocker being Jolly.

The ladies were up next with the reveals. First announced was Janelle Arthur, the country singer. Second finalist was Candice Glover, the soulful powerhouse. Third was Angie Miller, and it would have been a shame if she didn’t make it. Fourth lady finalist was Amber Holcomb, deservedly so. The final lady was Kree Harrison. And again I was 4 out 5 with my picks and I’m surprised Janelle made it over Breanna to be honest.

The finals begin next week. Who is your favorite? And do you think the right people made it into the Top 10?