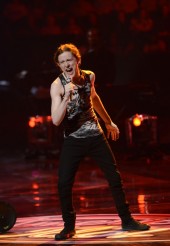 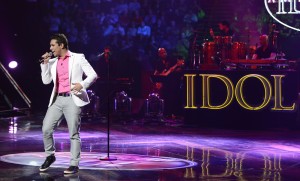 After an up and down battle between the ladies in the first part of the Top 20 performing on the world’s greatest karaoke competition, AMERICAN IDOL, the biggest question about tonight is will Keith Urban love every single performance and will Mariah Carey actually say anything worthwhile.

It appears as if I might have been wrong about Nicki Minaj. If last night is any indication as to how things are going to be with these judges, Minaj may be the only one with something to say of interest outside of Randy Jackson. Albeit, it is usually an odd unknown language type of something but at least it is something other than loving everything or just saying basically nothing the entire time.

So with the girls done and over, the boys are up. Let’s get it started.

Hmm well this is an interesting case of where I actually will say that this was really the wrong song for this dude. Singing “Stay” By Rihanna just was not the right choice. It seems as if he can sing and he looks like he could mantel a pop album but, my God man, do something with the song. Show some freaking emotion or something because it was lacking. However, with his looks he might be one to make it by. Hard to believe but freaking Urban loved it, Minaj says he is marketable and liked it, Jackson said it never really got out of first gear, and Carey (who looks really amazing tonight and should wear that outfit all the time) recapped what the other three said. Grade: C

Nice that we finally get a modern song that’s still being played on the radio in “Locked Out of Heaven” by Bruno Mars. While that’s good, the bad is he was all over the place on stage. Making weird faces. Pandering to the audience. Wearing that awful jacket. Felt like he was at Disneyland in one of those little kiosks getting the kids hyped up while they wait in line for Space Mountain. Urban actually didn’t love it and thought it was the wrong song, Minaj said he needs a new stylist, Jackson said he struggled with the song, and Carey said the audience liked the up tempo of the song but she couldn’t come to say she didn’t like it (even though she did). Grade: C

Holy s*** how the hell did this kid get to this stage on this show? Usually they 86 weirdos like this during the auditions. Yet, here he is on stage and … wow, just wow. Not sure if I will ever be the same after hearing his version of “Mama” by Genesis. Not in a good way either. I may be emotionally scarred. I may need therapy. Charlie was a horrible wreck on a major freeway where you totally hate seeing it but just can’t look away. Absolutely terrible. Urban struggled with words to come up with for what he just witnessed, Minaj said she felt like someone stole her kid, Jackson is worried for him and called it terrible, and Carey didn’t want to beat the kid up anymore and basically tried to let him down easy. Grade: F

Are you sure this guy shouldn’t be on British IDOL? Because his name sure sounds like it. Wherever he’s from he’s gotta lose that hat. It’s terrible. Go with the beanie at least. Singing “Iris” by The Goo Goo Dolls this was by far the best performance of the night, which isn’t saying a lot considering the first three were terrible. The pop version of this song was interesting and he’s got some talent and given the first three probably won’t move on, he’s got a strong chance of making it. Urban loved it (he’s back!), Minaj thought it was a good performance but not great, Jackson thought it was a good solid performance, and Carey basically said a slew of things that made no sense. Grade: B-

I’m not sure how many people will recognize “I’m Here” from THE COLOR PURPLE, but it may not matter given that the performance was actually pretty good. Hell, after Charlie Askew’s massacre anything that is sung even decent sounds good. However, the good news is that Burnell has a good look to go along with a solid voice and that will probably land him in the next round. Urban loved it, Minaj loves his voice and look, Jackson said he grabbed everyone’s attention right away which is good, and Carey liked how he mixed up the song even though he sang it already once. Grade: B

Do they get points deducted from their score if they decide to go with competing artist songs from THE VOICE. Paul sang “Just a Fool” by Christina Aguilera and if choosing a VOICE judge didn’t subtract points, the ups and downs in his voice definitely did and so did the over-singing of the song that he was dinged about in the previous round. Unless the rest screw it up, he may be in trouble. Urban didn’t love it but wasn’t jolly about it (pun intended), Minaj thought it was a solid performance, Jackson liked parts of the song but not all of it, and Carey just re-told what the other judges said. Grade: C+

I’m not saying I’m a style guru but surely they had something backstage that wasn’t hot pink? The good news is that it is a singing competition. The better news is that he’s a good looking white boy and they usually do extremely well on IDOL. But the best news is that singing “Feeling Good” by Nina Simone, which is one song we usually hear once or twice during the show, he actually did what was probably one of the Top 2 best songs thus far of the night. All of that adds up to him staying another round. Urban loved it, Minaj also loved it, Jackson said he is in it to win it, and Carey actually thought there were some low moments that didn’t fit his voice but overall like the performance. Grade: B

Well, at least he didn’t run around with under age children and piss all over the place during his performance of “I Believe I Can Fly” by R. Kelly. While he was all over the place in terms of his emotions and singing, he made it work and those high notes were pretty outrageous. Given the bad stuff we have seen so far, he’s a shoe-in for the finals. Urban loved it, Minaj ranted about needing more people and singers like him, Jackson said that Curtis is one of the few people bringing it, and Carey said she needed this performance. Grade: B+

Remember what I said about good looking guys do very well on the show. Well, they don’t necessarily have to be white boys. The Latin continent is a strong voting bloc on IDOL and always has been. When the dude can also sing well as Devin did with “It’s Impossible” by Perry Como that makes him nearly a shoe-in for the finals. Urban loved it, Minaj called him a Spanish Ken doll, Jackson called him super cool and really likes him, and Carey thought the performance was incredible. Grade: B+

This was a really good choice by Vincent in “End of the Road” by Boyz II Men because pretty much everyone has heard this song once or twice in their lifetime. And on IDOL it is sometimes about picking the right song that people can identify as much as it is about the performance in general. This wasn’t the greatest pure vocal but the song itself may give him enough to go to the next round. Urban thought nerves got the better of him but hopes he goes through, Minaj said it wasn’t his best performance, Jackson said he overshot on the song, and Carey said the song had moments of brilliance. Grade: B-

So who will America choose? I think it will be Curtis Finch Jr., Lazaro Arbos, Devin Velez, Burnell Taylor and Vincent Powell.