Home » once upon a time review queen is dead

We get some more of Snow's back story, but it sets up an icky turn to darkness 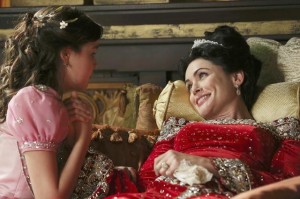 It’s almost always fun to get a charcter’s back story, and on ONCE UPON A TIME, those back stories have made for some great set-ups. But in “The Queen is Dead,” the story of Snow and her mother’s death, there’s just a meanness and a progressing darkness to the whole proceeding that doesn’t quite fit the world of the show as we know it. You end the episode feeling icky, and that’s not good.

On the plus side, we’re beginning to get a hint of what’s driving Cora (Barbara Hershey). One of the great things about the show is that none of the evil characters that we’ve connected with for any length of time are straight up, out of the box, evil. We’ve seen how Regina (Lana Parilla) became evil. We’ve seen how Rumpelstiltskin (Robert Carlyle) turned into what he is. Both were trying to be decent people, and neither were particularly eager to accept their dark paths, but eventually succumbed.

Better yet, their paths this season have been steadily in the direction of seeking redemption and struggling to put aside their former evil ways. Until the past couple episodes, in which Cora has corrupted Regina again and Rumpelstiltskin/Mr. Gold came face up against his son Neil/Baelfire (Michael Raymond-James) and the anger leftover from their lives together.  Maybe it’s because I love redemption as a theme, or maybe because we look at it so rarely as a culture that it is far and away a more interesting choice than most of what what we see in our media, but I was really enjoying that struggle in the series. Now, I’m seeing a much more cynical turn in the story-telling, and while even Charming (Josh Dallas) and Snow (Ginnifer Goodwin) have had their dark moments, there has always been hope as the under-lying theme, that good will somehow triumph in the end.

Obviously, it starts with Snow’s (Bailee Madison playing Snow White as a young girl) childhood. Okay, so Snow isn’t perfect yet. As she chews out her nursemaid Johanna, her mother Queen Eva (Rena Sofer) is on hand to gently remonstrate. Okay, seriously cool moment for us Downton Abbey freaks – Johanna is played by Lesley Nicol, aka Mrs. Patmore, still sounding kind and lovely, but not nearly as Yorkshire. It’s Snow’s birthday, the big ball is coming up, but Eva falls suddenly and violently ill and it’s not looking good.

Apparently, the writers have left themselves an opening to introduce new characters into Storybrooke, because our next scene is there, Snow/Mary Margaret is not happy that it’s her birthday again, and it looks like Johanna has dropped off a present, Snow’s princess tiara. “Did you know Johanna was in Storybrooke?” Charming/David asks. Nope, Snow didn’t know, so I guess there may be still more folks from the Enchanted Forest in town. How convenient.

But David goes off to work, only to whacked upside the head by Hook (Colin O’Donoghue) who wants his hook back. Mary Margaret goes off to find Johanna, who says she found the tiara in Mr. Gold’s shop. Hmmmm. That was a risky thing to obtain. But it’s a warm meet-up until Mary Margaret discovers Regina and Cora in the woods trying to dig up Rumpelstiltskin’s magic dagger that gives him his power. Snow thinks she can reach Regina at least enough to slow her down and sets off to do so.

In Manhattan, Mr. Gold is trying to convince Emma (Jennifer Morrison) that she should convince Neil to come to Storybrooke, if only for Henry’s (Jared Gilmore) sake. After all, Henry has run away before to find her. Sadly, things are still pretty rocky between Henry and Emma about her lying about his father – sort of understandably, but still heading toward that rocky slide into cynicism that’s bugging me.

Back in the Enchanted Forest, with Eva dying, Johanna suggests that Snow call the Blue Fairy, who offers Snow a really awful choice. She can save her mother’s life with a magic candle, but someone else has to die in her mother’s place. That is just so seriously wrong in so many ways, that it should have tipped me off, but it didn’t. Dropping something like that on a 10-year-old kid? Ick! Funny thing is, when Mary Margaret meets up with the Blue Fairy to try and get the dagger from Mr. Gold’s shop before Regina and Cora do, Mother Superior (Keegan Connor Tracey) doesn’t remember anything about the magic candle. Tip-off number two and I also missed it.

In Manhattan, Hook catches up with Mr. Gold and hooks him, only to be slammed over the head by Emma. Yeah, but the problem is, the hook was poisoned and only magic will save Mr. Gold. Even Neil can’t let his father die, so they’ll find a way to use Hook’s magic ship to get Gold home, while Gold tells David where the dagger is. And there was some exchange between Neil and Emma about knowing Hook before and something about living a hundred years, but it was so garbled on the part of Raymond-James, that I couldn’t catch it and it could have been important. Also, it turns out he has a fiancee. Okay.

Young Snow can’t use the magic candle to heal her mother, horrified and devastated that she can’t cause the killing of someone else in the face of her great need. Eva tries to console her, but it doesn’t work so well, encouraging her to hold the spirit of goodness in her heart. But after the funeral, we find out that the Blue Fairy wasn’t the Blue Fairy after all, it was Cora – who confesses to Eva’s stiff that she’s The Miller’s Daughter. I knew it, I knew it, I knew it! It’s the original fairy tale of Rumpelstiltskin. But apparently, she also had some issue with Eva, which as noted above, one of the really good things about this show – and why I’m really hating this dark, cynical turn we’re taking.

In Storybrooke, as David and Mary Margaret retrieve the dagger, Regina and Cora pop in with Johanna in hand. Pulling the heart trick on Johanna, Regina gets Mary Margaret to hand over the dagger. Then Cora kills Johanna anyway. Yuck.

Regina does confront her mother, saying that if her goal was to make Regina queen, she won a long time ago. Hmmm. The issue is definitely with Cora, who is determined to turn Snow’s heart as black as coal for some reason. It seems to be working. Mary Margaret is in such a funk about Johanna, she decides being good hasn’t gotten her anything but more and more loss. To heck with justice, she’s going to kill Cora.

That level of despair just feels so off and icky. Granted, the writers have to find new conflicts, but this just did not feel right by any measure. And based on the tease for next week, it looks like it’s just going to get darker. Ugh.

Article Source: Assignment X
Article: TV Review: ONCE UPON A TIME – Season 2 – “The Queen is Dead”