(c) 2013 ABC/JACK ROWAND
Dr. Victor Frankenstein and his brother in ONCE UPON A TIME In the Name of the Brother
Reviews

A stranger comes to Storybrooke, but this one is more about who's the real monster 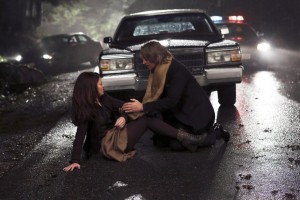 Mr. Gold (Rumplestiltskin) tries to help his beloved Belle, who has lost her memories of him in ONCE UPON A TIME "In the Name of the Brother" | (c) 2013 ABC/JACK ROWAND

We’re going to pick up ONCE UPON A TIME right where we left off last week – with the car crash coming right on top of Mr. Gold (Robert Carlyle) trying to leave Storybrooke in search of his son, only to have Belle (Emilie de Raven) getting shot by Capt. Hook (Colin O’Donaghue) and falling over the city limits line so that she no longer remembers that she and the rest of Storybrooke are the real fairy tale characters brought to our world by an evil curse. And then Hook gets hit by a car coming into Storybrooke. And so begins “In the Name of the Brother.”

Everybody’s stressing because “a stranger” has come to the town, where there is now some magic. But we’ve had the odd stranger show up before. Emma (Jennifer Morrison) started out as a stranger until she got integrated into the town, and then broke the curse obscuring everyone’s memory of who they were. August was a stranger, even if he was Pinnochio who got transported to our world in the same wardrobe as Emma when the curse originally happened, and I could swear someone or other has shown up, as well, but I could be wrong. So I guess everyone’s assuming this new person, Greg Mendell (Ethan Embry), has no connection with fairy tales or any other land. But come on. This is ONCE UPON A TIME. What are the odds?

So Hook has some broken ribs, Belle is terrified of Gold and the stranger (Mendell) is slowly bleeding into his lungs. But for some reason, Dr. Whale (David Anders) is reluctant to operate. Of course, some of the other town members aren’t exactly thrilled with letting him live and then ratting them out to the rest of the world. Good thing Prince Charming, aka David (Josh Dallas) is around. He insists on doing the right thing by saving the guy. If only he can get Dr. Whale to cooperate. Whale has apparently lost his confidence after messing up with Regina’s (Lana Parilla) love Daniel earlier this season.

But as we flashback to Whale’s original black and white land, we see him and his uniformed brother Gerhardt (Chad Michael Collins) being treated to holiday presents from their also-uniformed and decorated father Alphonse (Gregory Itzin). Gerhardt, clearly the favorite, gets an heirloom watch. Victor (aka Whale) gets a commission in the army, meaning he’s going to have to give up his experiments in re-animation. So just as Victor is packing up to go, enter a very colorful Rumpelstiltskin (aka Mr. Gold) with enough money to help Victor continue. All Rumpel wants is to learn the science behind what Victor does. Hmmmm.

In the meantime, Emma is questioning Hook about where the evil Cora (Barbara Hershey) is and what she’s up to – Hook’s not saying, no surprise there. Not to mention Gold trying to get Belle to remember who she is with the beloved chipped cup. Belle remains terrified and smashes the cup in the process, again, no surprise.

Back to black and white land, Gerhardt gets shot and killed while trying to stop Victor from robbing a grave, so Victor decides to try to re-animate Gerhardt. Well, we know how that goes, like it doesn’t and Alphonse is killed by the monster Gerhardt, who eventually tries to convince Victor to kill him, then runs off.

Ruby (Meghan Ory) sniffs out Whale and rescues him, and in a charming moment, Whale sighs that people know the monster as Frankenstein, even though that’s his name. Ruby, who as Red Riding Hood, is actually a werewolf, gets the whole people think you’re a monster thing and manages to convince Whale that it’s better to work against those perceptions than give in to them. So Whale saves Mendell. Emma goes in to question him, but he claims he didn’t see anything at the accident because he was texting behind the wheel at the time. So Emma lets him off, but…

Now, we finally catch up to Cora, who has a little gift for Mr. Gold. He’s skeptical, as who wouldn’t be, knowing Cora, but she’s offered him a way to find out where his missing son Baelfire is with a magic globe. Then the next we see her, she’s searching Regina’s house – turns out Charming and Emma and Henry all want to find Regina, too, but to tell her that they know she didn’t kill Archie. But Cora has magic to burn, and she finds a little plaster hand-cast of Henry’s hand, obviously done when Henry was a very young lad. So the next thing we see is Henry (Jared Gilmore) heading off through the graveyard to Regina’s crypt. You know that’s not Henry and as soon as Regina lets him into her inner sanctum, guess who?

We know Cora is manipulative as all get out, so are we ready to buy her apology to Regina? No way! But I get that Regina might be a little more forgiving. Cora is her mother and even those of us whose moms are really bad (though it’s hard to imagine a more twisted mom than Cora) are inclined to give our moms the benefit of the doubt simply because they are our moms and we want to believe that they truly love us. So Cora gets busy stoking Regina’s hatred of the rest of the town and talk about bad timing, when they’re ready to forgive her.

Still, we haven’t gotten there yet. And as Henry is pointing out to Charming, Emma and Snow (Ginnifer Goodwin) that Whale’s story is not in the fairy tale book he has that led him to Emma in the first place, Mr. Gold shows up at the loft and calls in the favor that Emma owes him – she’s going to help him find Baelfire. Now, keep in mind, we have Henry’s real daddy somewhere still out there, presumably in New York City where we first found him in the season premiere. Could it be? Could it?

We’ll have to wait to see, since we’ve got a few weeks off before the next episode.

Article Source: Assignment X
Article: TV Review: ONCE UPON A TIME – Season 2 – “In the Name of the Brother”

Tags: Ginnifer Goodwin, In the Name of the Brother, Jared Gilmore, Jennifer Morrison, Josh Dallas, Lana Parrilla, Once Upon A Time, Robert Carlyle