Home » exclusive interview once upon a time season 2

Exclusive Interview: The creators of ONCE UPON A TIME chat about the rest of Season 2 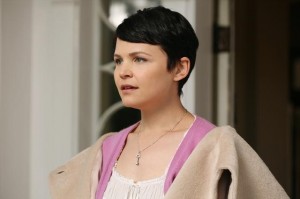 In ABC’s ONCE UPON A TIME, Sundays at 8 PM, a lot of fairytale characters – including Snow White (Ginnifer Goodwin), Prince Charming (Josh Dallas), Jiminy Cricket aka Archie Hopper ((Raphael Sbarge), Regina aka the Wicked Queen (Lana Parrilla) and Mr. Gold aka Rumplestiltskin (Robert Carlyle) – have been relocated by a curse from Fairytale Land to Storybrooke, Maine. In Season 1, none of the characters, with the exceptions ofRegina and Rumplestiltskin, remembered who they were. Thanks to Emma (Jennifer Morrison), the grown daughter of Snow and Charming, and her young son Henry (Jared Gilmore), the curse was broken at the end of the first season. In Season 2, the Storybrooke residents are trying to cope with the new world, as well as threats from within and without.

The creators/executive producers of ONCE UPON A TIME, writing partners Edward Kitsis and Adam Horowitz, worked on LOST and of TRON: LEGACY, but nothing could have entirely prepared them for making ONCE UPON A TIME, because there’s never been a TV series or film quite like this one.

At a party thrown by ABC for the press, Kitsis and Horowitz graciously step out into the hallway for a chat about their ongoing magical tale.

ASSIGNMENT X: One of the great things about ONCE UPON A TIME is that you can’t point to some other TV show and go, “Well, it’s similar to that one over there.”

KITSIS: ABC said, “Go for it” from the get-go. From the moment we pitched to our partners at the studio, to the network, they said, “Let’s go for it.” 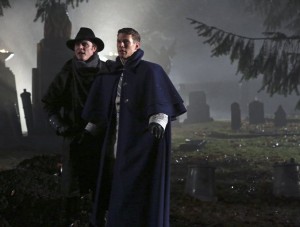 Dr. Victor Frankenstein and his brother in ONCE UPON A TIME "In the Name of the Brother" | (c) 2013 ABC/JACK ROWAND

ADAM HOROWITZ: We were the crazy show with dwarves and fairies and things, and they just said, “This is our crazy show, let’s not try and put it back in the box – these guys have an idea, they have a vision for it, we were coming off of LOST.” It wasn’t like they were looking for us for a procedural about a district attorney or whatever. So they really were like, “Go, go, go for it,” and then they liked what they got. They’ve been really supportive and cool.

AX: Are there any characters who, when you conceived this, you thought, “Oh, we’ll throw them in,” and then they became more important as the show went along?

HOROWITZ: The thing is, you always have hopes for the characters, so you try to design them with an arc in mind, and then if that takes off, of course you write more for them. So obviously, this year, Captain Hook [Colin O’Donoghue] has been really fun to write for, but we intended it that way. Then I guess there are people who have come back more than we thought. Ruby [Meghan Ory], definitely. Ruby in the pilot – we always wanted Red Riding Hood, but Meghan really just earned her way onto the show. Every time we went to her, she was so great, so we started writing a little more for her, a little more for her, and then she became pretty integral.

AX: And then the romance between Belle, played by Emilie de Ravin,  and Rumpelstiltskin, or as fandom calls it, Rumbelle – did you intend for that to become a regular part of the show, or was that originally intended as, ‘Ah, he blew it”?

KITSIS: Well, here’s the thing. We worked with Emilie for a long time [on LOST], so we had super-high hopes. We’d been fans of Robert forever. They’ve exceeded all our dreams and expectations in how they play together –

HOROWITZ: We knew that we were going to do Beauty and the Beast, and then we put her at the end in the insane asylum, because we knew in the [first-season] finale we wanted to have Jefferson [the Mad Hatter, played by [Sebastian Stan] let her out. And of course, this year, we wanted to explore them more, but it’s really taken off in a way that’s even surprised us.

AX: There have been other surprises. There was that episode where viewers yelped, “Auggh! They killed Archie Hopper! Oh, no they didn’t. Whew.”

KITSIS: It was fun to watch the Tweeting during the moment and then when it didn’t happen …

KITSIS: Well, here’s the thing. When Regina walked in, he barked –

HOROWITZ: I think Pongo is in such shock that he was overwhelmed with grief, and also, Pongo is not a dog that is accustomed to death, what that does to the human body and smells.

AX: Are you at all afraid of running out of fairytales?

HOROWITZ: We’ve got a lot of ideas, a lot of things that we want to mine, a lot of parts of the big story we’re trying to tell that fit a lot of different things into it. While we are really trying to remain focused on our core group, the Charming family, Regina, Rumple, and everybody out from there, and we’re excited – as long as the audience gives us the opportunity by watching to keep telling the story – we have ideas on other characters and worlds and things we haven’t got to, because each season has to kind of be its own thing.

KITSIS: Well, right now, I don’t want to say we want to have an end point, because we feel like every day, we’re still fighting to keep it going, in the sense that we’re only in Season 2, so for us, we don’t take anything for granted, that there’s a Season 3 or a Season 4. So we just take it a season at a time and hope that we get to the next one. If we make it to Season 5, then let’s talk. Eventually, of course, you’d like to end it on your own terms, whenever that is, as opposed to being canceled or letting it go for too long.

KITSIS: This is a twenty-four/seven lifestyle.

HOROWITZ: Obviously, we have TRON UPRISING, which is on Disney XD, and we’re co-producers on the TRON movie sequel.

KITSIS: This [ONCE] is pretty much our baby.

AX: Is there anything else you’d like to say about ONCE UPON A TIME right now?