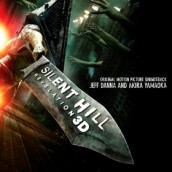 Just like every zombie-hardened heroine who inevitably gets pulled into a Japanese video game-turned-movie nether-realm, composer Jeff Danna has racked up enough points to start his own tour guide business after his contributions to RESIDENT EVIL: APOCALYPSE and SILENT HILL. Now six years after he abetted the original game themes of Akira Yamaoka, Danna returns to the town with SILENT HILL: REVELATION 3D that dare not speak its name to give even more original musical meat to the eerie fairy tale bells that’ve stood for the franchise long before it became film. Danna certainly has his crash-bang percussion work cut out for him with the swing swords of the story’s triangle-headed behemoths, as well as wailing klaxons that announce the arrival of a revengeful little witch- now grown here into an angst-ridden teen. Danna certainly has all of the horror score chops down, particularly when it comes to making the genre’s typical twilight zone of sound design and music far more interesting, and evocative than most such offerings. Blaring metallic effects, monk chants, rock rhythms, warped samples and a haunting piano are deftly woven into Yamaoka’s eerie, music box waltz melody.

But it’s Danna’s own, real-world emotional talents on scores like O and THE BOONDOCK SAINTS that bring a pleasing human touch into this madness with a beautiful piano and flute-topped theme that provide deliverance, at least until Danna graces the next (and hopefully better) sequel. As much of a haunted house score as it is a cursed town’s, the always-evocative REVELATION end with two powerful rock songs by Yamaoka, the first a haunting NIN-like song with “Rain of Brass Three Voices Edit.” Elizabeth McGlynn also provides driving vocals for the metal ballad “Silent Scream,” a tune which conveys the cool quality of the kind of rock anthems that ended far more straightforward 80s horror fests.

Clink on the link to buy the SILENT HILL: REVELATION soundtrack